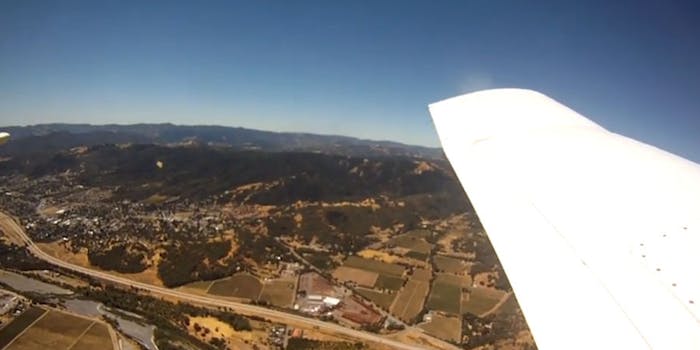 This GoPro camera fell from a plane, landed in a pigsty—and kept filming

This is perfect advertising for GoPro. Let's hope it's real.

Sometime in 2013, a GoPro camera disappeared after being mishandled by a group of skydivers.

Eight months later, its footage was found—in a pigsty.

In the video, the skydivers suddenly lose their grip on the device. It tumbles out of the plane and even soars aloft for a few seconds, giving viewers an impressive view of the landscape below.

Less than a minute after dropping from the plane, it crash-lands on the ground—and keeps recording! This is a very impressive feat, considering that the GoPro camera was probably not wearing a parachute.

Far from the thrill-seeking middle fingers of its original owners, the camera finds itself in a new home: a muddy pigpen. One of the pen’s plump residents quickly trots over and does what anyone would do when a weird thing lands in his home. He tries to eat it.

According to Mia Munselle’s YouTube description, the camera lay dormant in the pigpen for eight months until it was discovered. Uploaded Feb. 9, it has gotten more than 1 million views and soared to the front page of Reddit’s r/videos.

It’s so good, it’s enough to make you feel a little skeptical: The proven durability of the camera would be perfect advertising for the GoPro company.