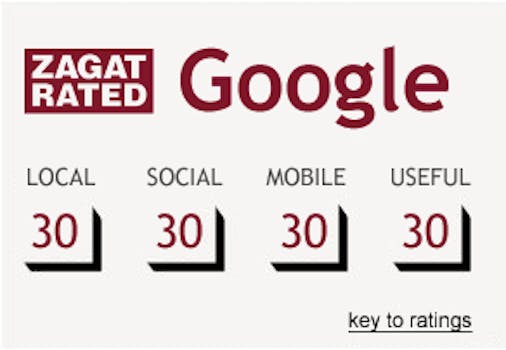 Restaurants and other local businesses may get better writeups thanks to Google's purchase of the storied guidebook brand.

Google, which dominates searches for local businesses but has struggled to define how it presents information about them, said it would acquire Zagat, the storied restaurant-reviews brand, and set off a flurry of reaction across online communities yesterday.

At 32, Zagat is not exactly an Internet startup, but it has been a pioneer in leveraging its audience for content, long before Flickr and YouTube similarly figured out how to profit from displaying their users photos and videos. Zagat’s reviews feature comments from surveys of consumers.

The company has been successful online and with mobile apps by building on the success of its restaurant guidebooks. Google has toyed with the idea of buying startups like Foursquare, the check-in service, and Yelp, a kind of next-generation Zagat. Those talks went nowhere, and Google has built up its own Places service, feuding with Yelp about how content from the startup’s reviews was included on Google’s descriptions of businesses.

Google has struggled to garner the same quality and quantity of user-written commentary on businesses on its own.

The Zagat buy has gotten mostly good reviews, and most made the connection to Google’s efforts to become more of a player in local-business information:

“Wow, not Yelp, but it did get next best,” PaidContent founder Rafat Ali added.

Some, though,  were perplexed by the acquisition, posting comments like “How much money does Google have?” and asking if Google was acquiring Zagat simply because it could.

The most curious reactions are the ones that suggest Google was entering into the business of creating content on its own.

“The Google-Zagat thing is very interesting. Harbinger of a pendulum shift back from amateur to professional reviews?” Sequentia Environics CEO Jen Evans said in a Twitter post.

But if you know anything about the way Zagat runs its surveys, that doesn’t make sense, since they’re written by consumers (and only subsequently edited into products like its guidebooks). Indeed, Zagat has struggled with some of the same issues Yelp and other similar sites have experienced with businesses trying to game its system to get favorable reviews.

While Google announced the acquisition on its blog, Zagat had fun with the announcement and posted a message on its home page in the format of its familiar restaurant reviews.