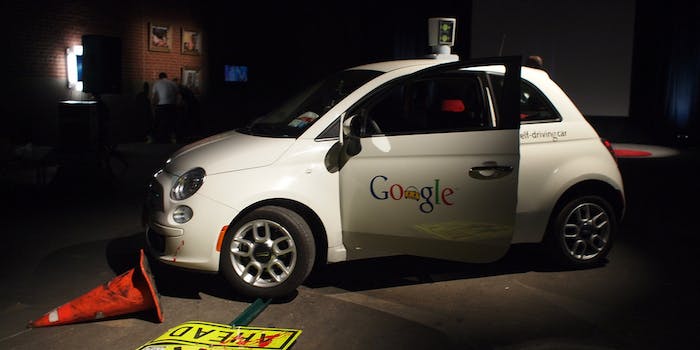 They told us the future would be weird, but they didn't tell us it would be here so soon.

The self-driving car is coming. Technically, it’s already here. And if Google has its way, you’ll be in one sooner rather than later.

If you watched HBO’s Silicon Valley the other week, this may all sound a little alarming to you. But in reality, the questions surrounding the self-driving car are far less dramatic than, “will I be abducted by one and accidentally shipped off to a man-made island?” The real conundrum surrounding self-driving cars right now: how do you write one a ticket?

Presumably, this is excellent news: Google’s cars seem to be performing spectacularly, cutting out the human error that was the impetus for their creation in the first place. But it’s hard not to assume that at some point, at least a few of these cars will run the risk of getting a ticket. After all, even the best made machines malfunction occasionally, although if the biggest issue with the self-driving car proves to be whether it can navigate minor traffic violations, then Google is off to a fantastic start.

Nevertheless, Madrigal did get an answer from Google on who would pay a ticket issued to one of their self-driving cars. In short, they would. In his piece, Madrigal quotes Google’s safety director for their self-driving car program, Ron Medford, as saying, “What we’ve been saying to the folks in the DMV, even in public session, for unmanned vehicles, we think the ticket should go to the company. Because the decisions are not being made by the individual.”

The problem that arises from this is that states like California give out points for traffic violations that go on driver’s records. Madrigal goes on to detail the struggle that the California DMV is going through right now to define how to efficiently rank violations for self-driving cars. Currently, the law defines the responsible party in these situations as the person operating the car. But if a corporation can be viewed as a person, can you count them as the operator in cases involving self-driving cars, and therefore assign them the allotted blame?

If we assume you can, then classifying corporations as people could actually help the consumer a great deal in the age of the self-driving car. After all, many already feel that the current system abuses drivers on a consistent basis when it comes to ticketing. Anybody who’s ever lived in a big city knows that parking signs can be ridiculously confusing. Things have gotten so bad in Los Angeles that, as is the case with many modern problems, someone invented an app to make deciphering the language of parking signs easier.

But the question of who pays for mistakes made by self-driving cars isn’t just one of legality. It’s also one of economics.

The city of Los Angeles brought in $45.9 million in the last fiscal year from parking meters alone, a sum which increased steadily by almost $10 million dollars just since 2010. And with California’s economy only starting to recover, the loss of this type of revenue could be devastating, whether it’s abusive to drivers or not.

The answer may end up being that both the inventors and the owners of self-driving cars will have to pay a kind of state safety tax. This would ensure not only a certain level of personal accountability, but also a consistent stream of revenue to make up for what the state would lose from tickets. The simple truth, unpleasant as it may be, is that the economy benefits from human error. If, in fact, Google’s self-driving cars continue to work as well as they’ve been testing, then they will be both a victory for safety, and a challenge for established driving laws.

The remaining piece of the puzzle is to figure out what to do for people who will continue to want to drive their cars themselves.

Last year, architecture and design magazine Dezeen published a lengthy analysis of what the self-driving car might mean for society by Fabrica CEO Dan Hill. Hill was prompted to write the op-ed after five cyclists died on London roads over the span of nine days. He questions whether more cars are the answer at all, citing, in addition to all the deaths cars cause through human error, intentionally depressing statistics about how we use them. For instance, he mentions that while most Americans spend 38 hours a year stuck in traffic, most cars spend 90 percent of their lives going unused. And he goes on to refer to a study that suggests 81 percent of Los Angeles’s central business district is parking lots.

And yet, Hill also acknowledges that cars will always hold a certain appeal. He just believes that appeal should be utilized more carefully. In Hill’s vision for the future, the traditional car might be purely a recreational item. “The allure of cars, albeit a fantasy most of the time, is significant though,” Hill argues. “They are wonderful machines, after all. So why not reframe them as ‘something for the weekend?’ Around freedom, excitement, identity, at your leisure.”

This isn’t as out on a limb as it might sound. If self-driving cars become the norm, classic car enthusiasts may still be able to purchase and use traditional cars as luxury items. Granted, the cost would probably go up to buy one of these vehicles, and there would also probably be an additional tax to own one (another way states could adjust their economies for self-driving cars), but the idea isn’t untenable. In the not too distant future, certain open roads could even be solely dedicated to drivable cars, like relics reminding us of wilder, more dangerous past.

As all of these possibilities emerge, it’s easy for some of them to start to seem like science fiction. The great sci-fi author Isaac Asimov even wrote a short story called “Sally,” about a future where senscient self-driving cars end their lives by getting put out to pasture when the time comes, sort of like livestock (the oldest car mentioned in the story? one dating back, fittingly, to 2015.)

We’re a long way from cars rising up against humans to take over the world, but it appears we may not be a long way from a future where self-driving cars are commonplace. This future probably isn’t worth getting alarmed about. After all, the main concerns that come with the self-driving car have so far been bureaucratic, rather than philosophical, in nature. However, it’s understandable to find the idea surreal, nonetheless.

Madrigal concludes his Atlantic essay by quipping, “They told us the future would be weird.” And maybe they did, but did they also tell us it would arrive so soon? Maybe that’s the thing about the future: you don’t know it’s here until you’re in it.