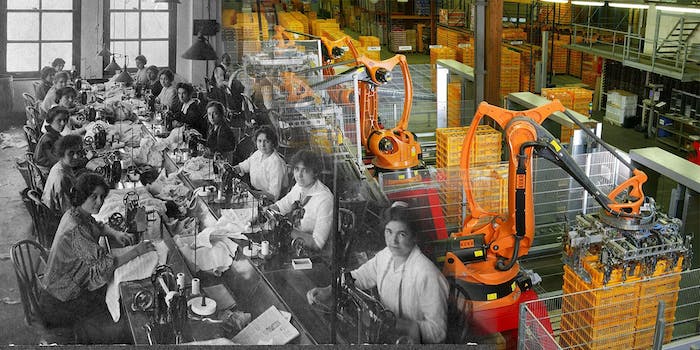 Google is using robotic technology to replace human labor with machines. By changing production, it could change the world.

When allegations against the Foxconn manufacturing plant—where Apple, Samsung, and Microsoft make large portions of their electronics—were first leveled in 2012, American consumers sure did seem angry. We were irate that their 1 million workers were grossly underpaid (or sometimes not paid at all), that 14-year-olds were making iPhones and Xboxes, and that the factory actually responded to people defenestrating themselves—seeking death rather than more work—by installing safety nets. As is so often the case, anger is all we could muster.

But what if those workers could be replaced? What if we could offer good (or at least non-lethal) work to foreign countries while keeping the price of products for ourselves down?

Enter Google, which—according to the Wall Street Journal—sent its head of robotics, Andy Rubin, to meet with Foxconn chairman Terry Gou on how the two could accelerate the use of robotics at the controversial plant.

The move is yet another sign Google is quickly lurching away from being merely an online entity—see, for example, the eight robotics companies it acquired last year or the testing of a new first-party delivery system tied to Google Shopping. This Google, aptly dubbed “Moonshot Google” over at BuzzFeed, wants to automate your house, your car, your phone, and—with this move—how those things are made.

Foxconn could prove itself the perfect testing ground for the fully automated future of product distribution that Rubin imagines, one in which robots build your product and deliver it to you. Comparing it to Google’s self-driving cars, Rubin told The New York Times that the project, while once considered “science fiction,” now “is within reach.”

A time when a Boston Dynamics-built robot will ride a Google-built automated car and drop your package off without human hands is certainly very far off (though surprisingly more likely than Amazon’s proposed delivery-by-drone). But robotic factories are a solid bet for the future of manufacturing, and few institutions have the brain-powered assets to pull it off like Google. In doing so, Google could be reducing the inequality between consumers in the first world and workers in the third.

Nearly every product we in the West enjoy—from clothing to smartphones to coffee—is produced in harsh conditions by cheaply paid labor. The issue gained some much-needed press coverage last year after a tragic roof collapse in a garment factory in Bangladesh claimed more than 1,000 lives. These plants—while offering necessary employment to the developing world—often fail to pass even the most basic safety tests while simultaneously overworking and underpaying employees, many of whom are children and at least some of whom could be considered slaves.

By automating the production of even complex merchandise like electronics (a huge portion of which is still created by hand), Google could turn down the dangers of third-world production in favor of what’s called “lights out” factories: factories so fully automated you can basically walk away as the machines make your stuff. A factory in Japan that makes robots is already there, meaning the droids are making more droids.

There are certainly problems with this aspiration, however, which Amazon knows very well. The largest online retailer has taken storied levels of heat for the conditions of its distribution centers right here in the U.S., and would probably love to replace all those whiny workers (with their families and health-care needs) with strident, complaint-free machines.

However, where does that leave the workers? This is an argument familiar to Detroit auto companies, who—during the great wave of automation that hit that industry in the ’80s—promised robots would create more jobs than they replaced. While that didn’t pan out for carmakers, a 2011 study conducted by the International Federation of Robotics found that even in developing countries robots were creating more jobs than they took, possibly even driving job growth.

Whether robots will fully replace humans across the manufacturing industry is yet to be seen. Such a revolution would require massive re-education efforts across the globe—a task that could take generations. And Google could just as easily be upsetting some rather vicious brutalitarians, from corrupt factory owners to human-trafficking operations. But what we do know is Google, if successful, stands to improve the lives of millions of workers across the world.

Using machines to both reach the inhuman standards of manufacturers while allowing workers to lead more human lives could be Google’s greatest moonshot yet.