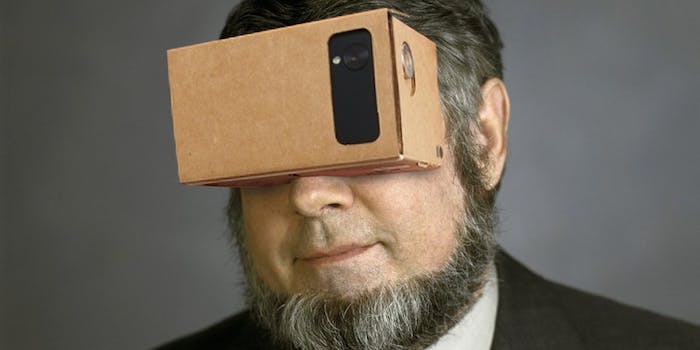 Cardboard is everything Google Glass never was.

When a new gadget is first unveiled to the public, it has to answer one seemingly simple but actually rather complicated question: How will anyone use it?

Many devices can get by on simply being cool or trendy, but eventually they all have to prove their worth to the average consumer. If the device is a relatively simple, single function tool—like a calculator or an e-reader—its intended use is pretty easy to understand. But since the rise of the smartphone and its almost infinite utility, very few gadgets are attempting to do just one thing. This complicates what a company must do to justify the existence of any new products.

This was the trap Google found itself in after its muddled release of Google Glass, the smart eyewear that became the preeminent symbol of tech bubble douchebaggery. Before the device’s release, Google worked extensively to explain to America why customers should shell out up to $1,500 for what basically amounts to a voice-activated camera strapped to their face.

Google’s famous video showing off how people might use Glass mostly relied on very specific circumstances in which the device might or could be practical—on a trapeze! Or a rollercoaster!

Combine that with its possible use among criminals, creeps, and identity thieves—not to mention its extravagant $1,500 price tag—and it is no wonder Glass was a rare failure for Google.

As I’ve written before, Google needs to adjust its widespread ambitions to the pace of the consumer market itself. It can’t drag out the next Jetsons-level invention and expect Americans to get on board immediately. It’s with this lesson in mind that, at its massive I/O developers conference, Google announced a major expansion of its astonishingly simple virtual reality headset, Google Cardboard.

With this very simple idea, Google hopes to introduce easy-to-use, headache-free virtual reality to educators and consumers at a low cost.

If you’ve never heard of Google Cardboard, it’s exactly what it sounds like. Instead of the bulky, futuristic headsets that have come to dominate the VR market, Cardboard is quite literally made out of a few scraps of the titular material. You drop your smartphone into the front of the setup, play a compatible video (like this one), and hold Cardboard up to your face like a hi-tech viewmaster.

While you do lose some of the immersive effect of headsets like the Oculus Rift, Cardboard serves as a perfect introduction, or “gateway drug,” to what virtual reality should feel like. Best of all, you can buy it for just $15 or, heck, make one yourself.

Like Glass, Cardboard is an early public test drive for a technology most consumers aren’t fully aware of—and even less would think to buy. Virtual reality to most consumers is likely still stuck in its Michael-Douglas-in-Disclosure heyday.

Unlike Glass, however, Cardboard is not an expensive, heavy commitment toward a technology with a still-questionable application. It’s something to try, not to own. This is emphasized by its lack of a head strap or even an earpiece to hold Cardboard in place. Cardboard merely provides a dark, portable theater to watch 360° video with a semblance of atmosphere.

Virtual reality to most consumers is likely still stuck in its Michael-Douglas-in-Disclosure heyday.

To call Cardboard a “gadget” stretches the meaning of the term, as the technology the system operates on is all in the smartphone. Earlier this year, Google announced that YouTube would be compatible with videos recorded for VR experiences; alongside Cardboard, Google unveiled Jump, its own camera rig for recording 360° video.

By utilizing its own infrastructure, Google is working around the technological leaps companies like Oculus and Samsung have had to surpass to make their visions of a virtual future a reality. The technology that makes VR so intriguing—position tracking, high-quality video, and sound—can already be achieved on most Android devices. With Cardboard, Google seems to be almost laughing at the idea that VR is really all that innovative.

This is exactly what Google knows it needs to explain to consumers: Cardboard isn’t really that big a deal. Unlike Glass, it doesn’t involve a major financial commitment and is desperately easy to use. If you own a smartphone, which most of you do, you can use Cardboard. No voice activation commands to memorize, no extra touch screens to feel around for, and no reason to ask why you couldn’t just do this with your smartphone.

Even if you might only use Cardboard for watching a music video or playing a simple game from time to time, that’s perfectly fine. You can always just take your smartphone out and your life goes on like normal.

This factor of commitment—not just how much a consumer spends on a device but how much it forces them to adjust their behavior—is perhaps the most overlooked factor when we talk about “the next big thing.” For what seems like no other reason than tech journalism’s fear of being proven wrong by the waves of fashion and time, smartwatches are a thing. They look nice, they might keep us healthier, and you can go buy $17,000 gold-plated one.

To call Cardboard a “gadget” stretches the meaning of the term.

But all smartwatch manufacturers have completely failed to justify the existence of their products. As Mat Honan postulated after the Apple Watch’s release, everyone is afraid to call out the uselessness of smartwatches, for fear they could be found in a listicle of wrongheaded predictions five years from now. After all, who could’ve predicted the rise of the iPhone?

Cardboard circumvents this entire cycle by being one thing smartphones, smartwatches, and smart eyeglasses can never be: change-in-the-sofa-cushions cheap. It’s an ingenious opportunity for consumers to merely greet a technology that, like smartwatches and Glass, is being announced with awe but could be met with exhaustion. Virtual reality headsets are likely to be awesome, immersive displays of nerdiness for only the richest of dweebs, but its biggest fans imagine they could change cinema, travel, sports, and most other things that might actually force us to leave our house.

While I’m not brave enough to publicly doubt that possibility, Cardboard allows us to dip our toes into the pool without debating how far down it is to the bottom.