Sexual assault is not something startups can ‘disrupt’

There is no app for that.

For some reason, sexual consent has become a confusing thing for people. Between opuses about the dangers of drunk college girls and criticisms of the “yes means yes” law, everyone is acting like the waters of who wants to have sex and when are becoming murkier.

In reality, there’s nothing confusing about sexual consent. There are actually a million things that make it clear when a person does or does not want to have sex, things like saying “no” or “stop.” Things like pushing a person away, making repeated attempts to leave, or being of unsound mind to make such a decision. These are just a handful of easy ways to determine that someone does not wish to engage in intercourse. They are obvious and they are many.

Consent does not require retooling. Unfortunately, there’s a machine that loves to do exactly that—find “inherent” problems with an original system that simply aren’t problems, and then work backward in order to solve these invented issues.

That machine is startup culture.

A new app called Good2Go wants to make sexual consent only a download away. Though there’s nothing legally binding woven into the app, it launches an informal sobriety test and allows you to indicate whether you are “good to go” and sends this notice to your sexual suitor. 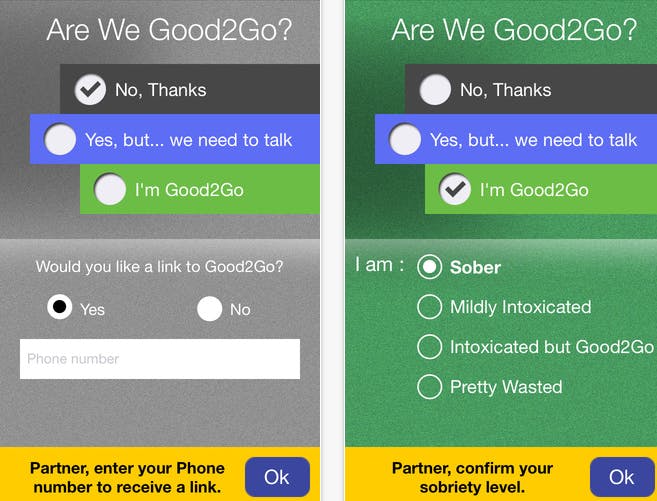 It’s a very startup reaction to have: You find a pain point, and you use technology to try and ease or erase it. Usually it’s just a degree of something getting better, and sometimes it eliminates an issue entirely (usually those issues are very small, say ordering pizza on-demand). But if you find a problem big enough, something that affects a large group of people, and your solution is accessible or dynamic enough, it doesn’t even have to completely solve the problem in order to be successful.

So, looking at sexual assault and consent as an opportunity, this thinking totally works out: There are more than 235,000 sexual assaults every year. One in five women is a victim of attempted rape within her lifetime. Sexual assault and rape are huge issues for college campuses. Here you have 1) a large demographic, 2) a particularly mobile-active one, and 3) the goldmine that is teen/young adult users.

The numbers work out: An app that can “disrupt” sexual assault and fix problems with consent is something that would be good, and necessary… and successful. It’s not like the creators of Good2Go crunched the numbers to figure this out; the inherent mindset of the startup industry is to react to issues with “fixes” in the form of products. Oftentimes, that fix isn’t really a fix, and the app accrues a little buzz until we realize it’s not actually doing anything and then we stop using it.

And when it’s for something like taking selfies, or ordering toys for your dog, or using your phone to dim the lights in your garage, it’s fine. You tried it, it was “meh, whatever,” you uninstalled it.

But the most odious kind of startup does a combination of all of these things, and in the process, actually creates more problems. And that’s Good2Go.

Sexual assault is not a thing that can be disrupted by an App Store download, and advertising it to any degree minimizes the crisis that sexual assault is. Good2Go almost lends credence to the idea that there could be “confusion” over what is and isn’t sexual consent, then places the burden on the person at risk of assault to prevent it. It’s almost like saying, “Bros, we know sexual consent is confusing for you! There’s an app for that!”

The perverse idea that a few clicks could clear up anyone’s misconceptions about consent is a dangerous thing to even slightly perpetrate. There is no app for that.