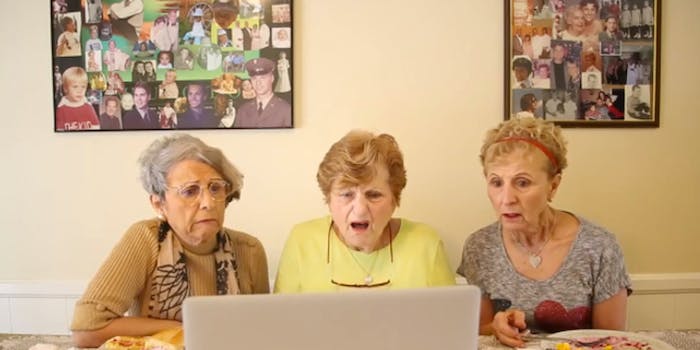 Culture continues to be whipped by the longtail of Beyoncé‘s “Drunk in Love.” Now, it’s influence has reached the Greatest Generation.

In this video posted by World Star Hip Hop, the Internet-famous Golden Sisters sit and eat sandwiches in front of photos of grandkids, and discuss the hypersexual lyrics of the “Drunk in Love” remix featuring Kanye West, who is mistaken for a basketball player, because Kim Kardashian “likes them big.”

As they read lyrics from a laptop, they gasp at West’s indecencies and struggle with meaning of “park it in my lot, 7-11.” They wonder how this could have happened, since “[Beyoncé’s] husband is such a sweetheart.”

“We never talked when we had sex,” Mary says. “What’s all this talking?”


The final consensus: “That’s a number one hit? That’s a piece of shit, that’s horrible.” Someone bring back their show, please.