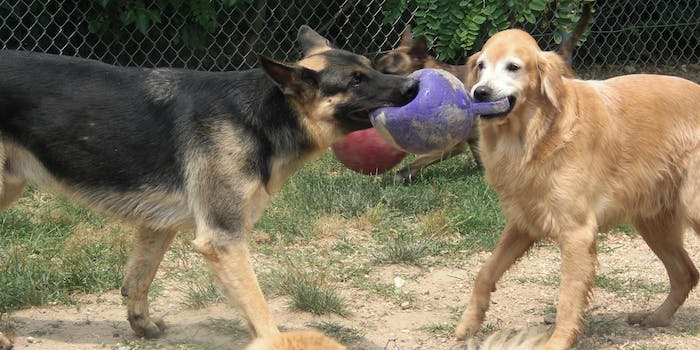 You'll never guess which one of these dogs knows how to put it away better.

If you were asked to place a bet on an eating competition between a golden retriever and a German shepherd, you’d likely go all-in on the German. After all, how much damage could a docile family dog like a golden do against the vigilant and sharp shepherd that spends its day serving in the line of fire?

You’d be surprised. Don’t let golden retrievers’ sweet, unassuming demeanors—or their mouths so soft they can carry an egg without breaking it—fool you. When it comes to food, goldens don’t mess around.

When the two canines are placed in front of their respective plates of spaghetti, all bets are off. The golden retriever manages to scarf down his noodles in one vacuous bite that lasts all of 3.98 seconds, while the German shepherd takes almost 45 times as long to complete his dish.

Though he may be able to tackle a man running from the law in one swift bite, the German shepherd just can’t seem to conquer his noodles. After much hapless and sloppy chomping, he manages to finish at an embarrassing 2:58.