GitHub's code search feature makes it easy to see the prevalence of racist and sexist slurs among developers.

Just last month, in touting “the hip geeks” who socially engineered the election in President Obama’s favor, Slate proclaimed, “The Socially Awkward Do It Better.”  But while progressive politics are all well and good for geeks on a national level, racism, homophobia, and sexism are an ongoing plague in geek culture, judging from a stroll through GitHub, the open source code-sharing site that lets geeks bare their code—and their prejudices—to all.

Progressive geek blogger Tom Morris pointed out earlier this week that simply by inputting certain controversial keywords (including racial slurs) into GitHub’s search, you can see all kinds of not-so-progressive results.

Here’s an example of what snippets of Java code look like when they’re shared on Github—except usually, casual slurs aren’t used in programming: 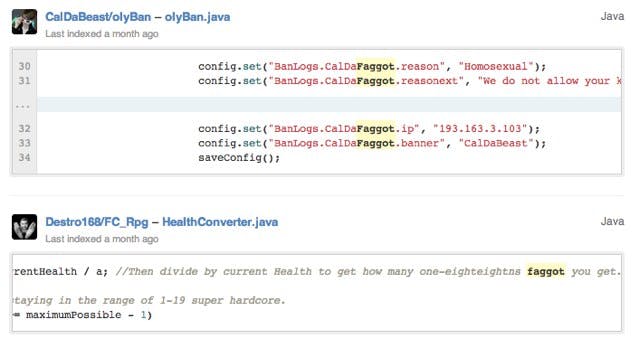 GitHub is a platform geeks and techies love because it not only lets you manage projects but allows you to share your code and your projects with the outside world. This kind of transparency obviously has its perks as well as its downsides—among the biggest is the fact that now we can see who’s coding what. And we can see exactly how mundane racism, misogyny, homophobia, and other kinds of prejudice are in the coding world on a granular level.

GitHub sits in the center of an Open Source community that has been dealing with heated ongoing controversy over its lack of diversity. In November, BritRuby, a Manchester conference of Ruby on Rails coders, was canceled after outrage broke out online at its all-male lineup of panelists. Ruby coder Sean Handley took to GitHub to criticize the online community for bringing down the well-intentioned conference with “careless words.”

“Turns out, a lot of the prominent Rubyists are white guys and all of the ones who said they’d like to come were, indeed, white guys,” he stated. “Making an issue out of that is, frankly, misguided.”

Is it an overreaction to make an issue, likewise, out of the words being used by GitHub coders? Perhaps. But if anything, Morris argues that the issue strikes at the heart of nerd culture itself:

The reason we’re seeing such vicious anti-equality bullshit in the geek community over the BritRuby situation and other conference type stuff is because the very existence of societal inequalities (against women, racial minorities, gender/sexual minorities) threatens the whole idea that hackers got where they are because they are super-fucking-smart.… A lot of what we call luck boils down to us being in groups that don’t face discrimination and other problems.

From last year’s all-out onslaught against the “fake geek girl” to the habitual association of the “nerd” with all things white, male, and non-working class, it’s this erasure of minorities within geek culture that prompted one blog to ask in 2010, “Is Nerd culture the embodiment of racist, sexist attitudes?” It’s also the reason the Ada Initiative exists to help support women in tech industries, as well as critiques of oblivious nerds like the Tumblr Programmers Being Dicks. 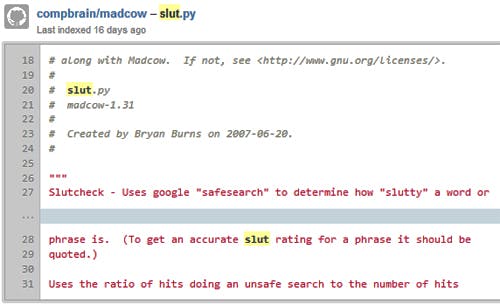 This bit of code assigns “slut” ratings to words and phrases based on Google’s SafeSearch algorithms.

Of course, as always, context is important, and some of the examples of word usage (like the one below) are clearly being done with a purpose, such as with the creation of a file of “bad words”:

But if the problematic language associated with programming language itself has suddenly become starkly visible, GitHub’s open-source model of geekdom might ultimately have an unexpected benefit.

It might just make it easier to open source equality.

All screengrabs via GitHub