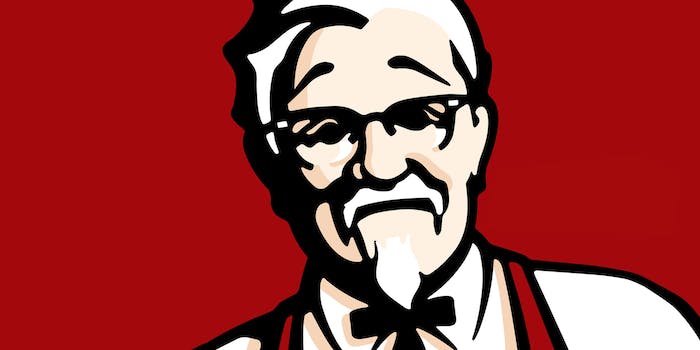 Regardless of what happened at the restaurant, the family has gathered more than $165,000 in donations for her medical bills.

The heart-wrenching tale of a little girl kicked out of a KFC for her facial scars, prompting Facebook outrage and more than $165,000 in donations, is a hoax, according to a local paper.

Mississippi’s Laurel Leader-Call, citing anonymous sources “with deep knowledge of the investigation” into the incident, has proclaimed the KFC incident “never happened.”

The girl, 3-year-old Victoria Wilcher, was the victim of a horrifying dog attack in April, according to her aunt, Teri Rials Bates. Three pit bulls swarmed her, Bates said, shattering her jaw, costing her an eye, and leaving her with deep gashes on her face. Bates created a Facebook page, called Victoria’s Victories, filled with photos and videos of Wilcher’s surgery and recovery.

On June 12, Bates wrote of insult added to injury: “Last week at KFC in Jackson MS this precious face was asked to leave because her face scared the other diners.” Her Facebook page exploded, gathering almost 200,000 likes, and a corresponding fundraiser page has raised more than $135,000.

KFC quickly offered recompense, though it didn’t cop to the story’s truth. “We immediately began an investigation,” a company representative wrote on its own Facebook page. “Regardless of the outcome of our investigation,” it continued, “the company is making a $30,000 donation to assist with her medical bills.”

But according to the Leader-Call report, the story is full of holes. Wilcher’s grandmother, Kelly Mullins, was reportedly with her during the KFC incident, and said it happened May 15, but surveillance footage apparently shows no evidence of it, and the Facebook page puts Wilcher still in the hospital at that time. Besides, one employee said, as the restaurant is near the Jackson hospital, they’re used to customers with injuries. “We’ve had people come in who were shot in the face. We’ve had them with tubes and wire sticking out. We never have asked anyone to leave,” the source said.

Bates disputed the Leader-Call‘s report on her Facebook page.

“I promise its not a hoax,” she wrote. “It is not over until KFC releases a statement.”

“I have personally watched this family go without to provide for Victoria,” she added. “They have not and would not do anything to hurt Victoria in any way.”

Update: KFC responded to the Daily Dot’s request for comment just after the original version of this article published. “Along with our franchisee, we remain determined to get to the truth,” KFC Spokesperson Rick Mayndard told the Daily Dot. “We expect to have the findings of that investigation soon, and we are committed to the $30,000 donation to assist with Victoria’s medical bills no matter the outcome.”

As of Tuesday evening, Victoria’s Facebook page and GoFundMe fundraiser are both unavailable.

A representative for GoFundMe told the Daily Dot that “in lieu of the ongoing uncertainty surrounding the ‘Victoria’s Victories’ online fundraising effort, GoFundMe has temporarily suspended the campaign until the full truth is made clear. Donors wishing to request a refund may do so at www.gofundme.com/contact.

Update 2: According to a statement sent to CNN, both investigations into the incident are closed, having found no evidence to support Victoria’s family’s claims. The GoFundMe campaign has been suspended, but KFC reiterated that it will honor its promise for the $30,000 donation toward the girl’s medical bills.