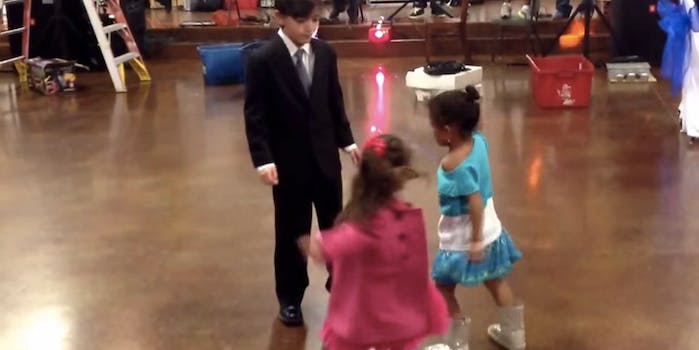 You will feel this little dancing girl’s rejection

The pain of youth.

In this video, a boy wearing a suit dances by himself—and he’s got some good moves.

Shortly, he is joined by a much younger woman in a pink dress. She grabs his hands and they start dancing together. His moves become more subdued.

Another woman emerges from the background, weeping. She is wearing sparkly boots. She grabs the woman in the pink dress and tosses her aside angrily. She embraces the dancing man. He looks confused.

The woman in the pink outfit walks away, seemingly unperturbed, as the dancing man puts his hands on his hips and looks patronizingly down at the woman in the space-boots. She bursts into tears and he takes up his jig once again as she staggers away, grasping for her mother’s embrace. The dancing man steps lively and quick, he hops and jumps and bows and his tight-lipped smile never moves from his face. His feet are light and nimble. He never sleeps. He says that he will never die. He dances in light and shadow and he is a great favorite. He never sleeps. He is dancing, dancing. He says that he will never die.