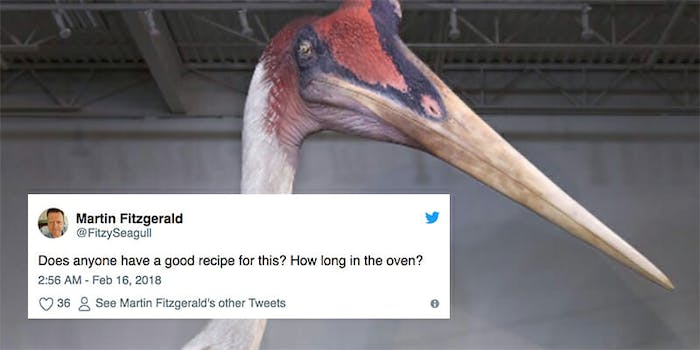 This prehistoric bird was ginormous—and everyone’s freaking out

'Does anyone have a good recipe for this?'

People on Twitter are absolutely losing their minds over a photo of a gigantic prehistoric bird.

The bird in question is the Quetzalcoatlus northropi, and a photo floated around Twitter on Friday showing a model of the massive creature towering over a measly 6-foot man.

Quetzalcoatlus northropi model next to a 1.8m man. The largest known flying animal ever exist pic.twitter.com/srbtMAvGhe

Some people were completely terrified.

Let’s not do this

no offense but someone made a mistake https://t.co/WiEamDqUiK

Does anyone have a good recipe for this? How long in the oven?

And still others marveled at the sheer size of the Q. northropi, which is the largest known flying creature of all time, according to the National Park Service. Its wingspan is estimated to have been between 36 and 39 feet.

Don't talk to me or my son ever again. https://t.co/RAWXcD5DOT

the wrong animals got extincted https://t.co/dfavcrh5Se

Twitter has Blue Rhino Studio out of Minneapolis to thank for the model of the bird, which is headed to a cultural center in Kuwait where it will presumably give nightmares to anyone passing through.

For all the curious archaeology nerds: The fossil of the Q. northropi was discovered by a University of Texas at Austin student at Texas’s Big Bend National Park in the 1970s, according to the National Park Service. The creature is named after the Mexican deity Quetzalcoatl, who was worshipped by Aztecs, and the bird’s anatomy was so weird that researchers are still trying to figure out how the hell it walked and flew.

It’s too bad that we’ll never get to experience the majesty of the bird in real life. But then again…

Imagine the indignity of getting eaten by this clown https://t.co/gw6OhGOsvo