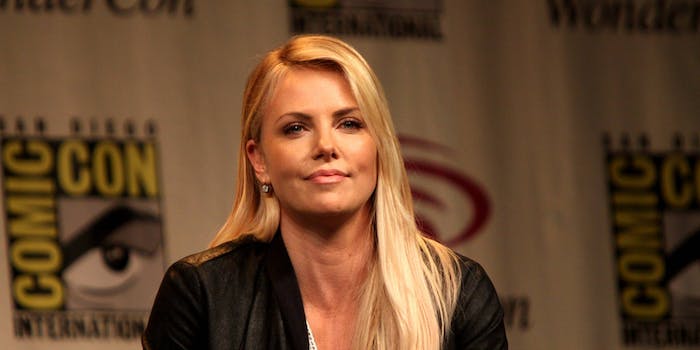 Ghosting is the worst way to break up with someone—until you're the ghost.

The New York Times has discovered ghosting. In response to the storied breakup between Sean Penn and Charlize Theron, the Grey Lady recently issued an explainer about everyone’s least favorite way to breakup with someone: by not breaking up with them at all.

A cousin to the “Irish Goodbye,” when someone bails from a party without notice, the Times’ Valeria Safroniya writes that it “refers to ending a romantic relationship by cutting off all contact and ignoring the former partner’s attempts to reach out.” According to reports, rather than ending her engagement Penn in person, Theron just stopped returning his calls.

Not to be out Vox-ed, Vox followed up with their own guide to the Swayze-inspired practice, and even Fox News got in on the game, all to answer a simple question: Why do we ghost?

It’s a complicated inquiry with a simple answer: Sometimes silence truly is the best response. For example, a friend of mine and his on-again-off-again boyfriend—who I despise with the fire of a thousand suns—have a habit of breaking up and getting back together. They’re trapped in a miserable, crappy relationship that neither of them know how to end. And something’s gotta give.

And rather than having the same conversation followed by the same reunion, I gave him advice that might seem controversial: Just go. In order to break our own worst patterns, it takes drastic action. It takes being the one who knows when it’s finally time to just leave already. We all hate that person, until we are that person.

In 2010, I was mired in a horrible, volatile relationship with a charming trust fund kid that I started dating in college. I was lonely, and I found out I had a hard time saying no to him—a perfect mixture of toxicity. He had started dealing drugs to pay rent and spent half of his time avoiding his dealer (who he owed money to); we fought constantly, but somehow I always got pulled back in. What was wrong with me? I constantly asked myself. Did I deserve someone who treated me this way?

Why do we ghost? It’s a complicated inquiry with a simple answer: Sometimes silence truly is the best response.

I got my answer on his birthday, when I planned to take him out to a movie. He blows off the date, making last minute plans with a friend. I was kind of used to it at this point, so I go to the film anyway, telling him we could meet up after. Again, he finds an excuse to be otherwise occupied—they’re out at a bar or something and he can’t get away. I tell him that I’m going home, and he can come over when he’s done.

When he calls me a couple hours later, I already know what he’s going to say. “I know you’re disappointed in me,” he sighs, “but can I disappoint you again this time?” If it sounds like a strange question, imagine being the one who was asked it.

I decide not to talk to him until he apologizes—a reasonable expectation after being blown off three times in the same evening. I don’t get a text or a call from him the following day. I wait. Two days, still silence. A week later, he finally calls me and I let it go to voicemail, because I want to hear what he says before I pick up the phone—I’m still that mad. When I listen to his message, it wasn’t a heartfelt entreaty to forgiveness—or even a half-assed excuse. He asks—and I’m not kidding—if I want to go tanning with him. Getting our skin ritually burned off together was his version of “I’m sorry.” I ignored the message and decided to wait for a better olive branch.

It never came, so I never called back.

While ghosting is frequently criticized for the ambiguity involved in fading out, there’s little that’s subtle about silence, which can be the loudest possible response. According to Jezebel, “generally a person worthy of ghosting has really done something really, truly terrible.” And as Alex-Abed Santos explains in a piece for the Atlantic, the person on the receiving end knows what’s up:

No person who has gone on dates in the last six years is genuinely confused about the message that ghosting sends. We live an age where we can listen to whatever songs we want at any moment, get in touch with anyone at any second, and order mozzarella sticks or a hookup with flick of an app. If someone you’re interested in isn’t answering your texts within five minutes, they are either dead, at a movie (and still have manners), or just don’t want to date you.

Slate’s Amanda Hess agrees, arguing that “it doesn’t take any specialized skill to read between the lines.” While the breakup might fulfill our momentary need for closure, it’s not a more honest rejection—just a different kind. When you’re breaking up with someone, you rarely ever tell them the whole truth. This is why clichés like “it’s not you it’s me” or “I really just need to work on myself” are so derided. It’s not an actual breakup, just a line to help someone rip off a bandage with minimal pain.

In fact, a guy once broke up with me in order to spend more time with his mother. That wasn’t a lot more helpful than the guys who didn’t call me back after three dates—and arguably, those guys left less psychological damage in their peaceful fade out. I know what went wrong: They just weren’t that into me. Do I need a skywriter or his mom to come help explain that concept?

It’s easy to blame the advent of social media for the ghosting trend. In an article for the Huffington Post, Jessica Samakow writes, “In an era of Tinder, OkCupid, JSwipe and Hinge, matchmaking often happens by swiping right and left, making potential daters literally disposable.” While technology has certainly transformed the way we connect and treat each other, ghosting is an age-old practice.

While the breakup might fulfill our momentary need for closure, it’s not a more honest rejection—just a different kind.

In fact, ghosting was probably a whole lot easier when your beloved wasn’t instantly reachable via the guilt-inducing magic computer in your pocket. It’s hard to leave when you know you’ll find 20 texts asking where you are.

I posed to my grandmother a scenario: In the days before a cell phone, let’s say you wanted to meet a friend at the mall. She decides at the last minute to make other arrangements, but she can’t text you to let you know because the technology doesn’t exist yet. What happens? My grandmother explained, “Well, it means a lot of people just didn’t show up.” You can lay the blame on millennials or “kids these days,” but ghosting isn’t trendy; to an extent, it’s human nature. It’s not OkCupid. It’s you, sometimes it’s him, but really it’s us.

To be honest, I didn’t think that much about ghosting my ex until months later, when a casual acquaintance informed me that “some guy” in her chemistry class told her that the two of us dated and that I had broken up with him on his birthday.

That obviously wasn’t true—because I never broke up with him—but I didn’t tell her that. I could have told her about the nights I spent slamming my fist into the wall when he would forget to call me or got high and fell asleep instead. I could have told her how badly I wanted to see him the last night we spoke, how desperately I wanted him to show up to our relationship, and how all I really wanted was for him to text me—just fucking text me—and tell me that things would be better. He would be better. What bothers me more than whether or not it was wrong to “ghost” him is the thought that I might have gone back.

So instead, I decided to take credit for his lie. “Fuck yeah, I did,” I shot back. “And I would do it to that asshole again.” It might not have been true, but it was just as good as the real thing.