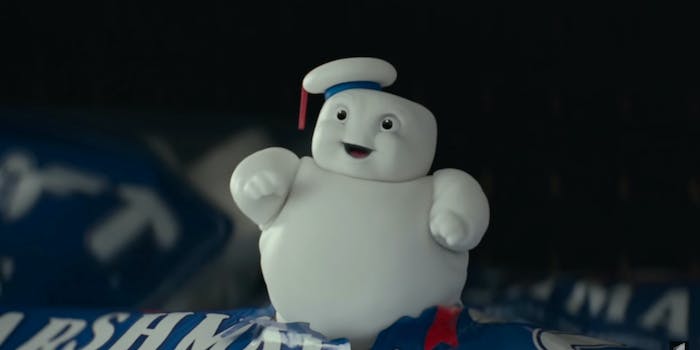 How is Stay Puft Marshmallows still around in ‘Ghostbusters: Afterlife’?

It's a very cute (and probably cynically nostalgic) Easter egg.

With a tentative theatrical release date of fall 2021 after the COVID-19 pandemic delayed its debut, Ghostbusters: Afterlife is slowly ramping up promotion again. A couple of months after unveiling a new ghost on a Spanish kid’s reality competition series, Ghostbusters: Afterlife revealed its newest character design—one that is both entirely familiar with both cynical and logic-breaking potential.

The clip, which was posted to Sony’s YouTube page on Wednesday, is just under a minute long and features Paul Rudd’s character, Mr. Grooberson, visiting a grocery store. He picks up a tub of ice cream and other ingredients for what might be a sundae before hearing some rustling come from a package of Stay Puft Marshmallows. A very cute and miniature version of the Stay Puft Marshmallow mascot, Mr. Stay Puft, pops out, but Rudd’s attempt to engage with it results in the marshmallow biting him. Several other miniature marshmallows roll in on a Roomba, roast themselves on a fiery grill, and turn themselves into s’mores by using a graham cracker as a bed and chocolate as a blanket.

We have no context—the last trailer for Ghostbusters: Afterlife was released pre-pandemic in December 2019—to the scene in the film. It’s possible that it’s nothing more than a nod to the original Ghostbusters: It’s mostly harmless. The scene in question is very silly and the miniature Mr. Stay Pufts are adorable. It will probably inspire a buttload of merchandise that will become popular because a mini Mr. Stay Puft is, again, incredibly cute. (For another recent contemporary of cute selling, see Grogu from The Mandalorian.)

Our context for the mini Stay Puft Marshmallow Men instead comes from our knowledge of the 1984 Ghostbusters film: The Stay Puft Marshmallow Man was the “form of the destructor” that Gozer took at the end of the film to destroy New York City in an event known as the Manhattan Crossrip of 1984. Gozer took that form because Ray Stantz (Dan Aykroyd) thought of the most harmless thing he could from his childhood instead of keeping his mind blank like Peter Venkman (Bill Murray), Egon Spengler (Harold Ramis), and Winston Zeddemore (Ernie Hudson).

Mostly, though, it leaves us with a lot of questions.

How does Stay Puft, as a company, still exist in Ghostbusters: Afterlife?

I will admit that my focus on the logistics of how a fictional company still exists in a decades-in-the-making sequel of a movie a lot of people love is, as a matter of contention, an extreme example of nitpicking.

Purely looking at the universe within the movie, it’s absolutely wild that Stay Puft not only managed to stay afloat after the absolute PR nightmare that would’ve likely resulted from a giant, demonic version of its mascot trying to destroy New York City, a catastrophe that likely led to the injury and death of hundreds, if not thousands, of New Yorkers. (It’s a scenario that the Upright Citizens Brigade imagined in a 2014 sketch that’s since been made private.)

It’s even more bewildering that Stay Puft Marshmallows would continue to use the Mr. Stay Puft logo instead of simply rebranding to get away from its mascot’s association with a supernatural demon who tried to bring about the end of the world. If you thought that Ghostbusters: Afterlife was the only party using Mr. Stay Puft’s likeness, take a closer look at the packaging of those marshmallows.

Am I putting way too much thought into this? Probably! But it turns out that I’m not alone. Twitter is filled with people asking the same question.

The in-universe counter-argument to Mr. Stay Puft’s continued existence as the mascot for the beloved marshmallow brand is that Stay Puft Marshmallows, which might have once faced an absolute PR nightmare, has magically overcome its accidental association with Gozer, the god of destruction.

A more cynical reading of Stay Puft Marshmallows’ continued presence in the sweets market in Ghostbusters: Afterlife is that several decades after the events of Ghostbusters, people kind of forgot that a demonic version of a mascot once terrorized a city—or they don’t care. Granted, Stay Puft Marshmallows’ association with the demonic forces that rained upon New York is accidental; it’s largely because of the stray thought in Ray’s head. But we don’t have to look far in our own world to find major companies that, despite reports of horrific working conditions or their role in an insurrection, are still thriving, so it might not be so surprising that Stay Puft Marshmallows is still around, too.

While we don’t know exactly how much time passes between Ghostbusters and Ghostbusters: Afterlife apart from it being long enough for one of the Ghostbusters to have grandkids, there is an element of unawareness built into the film’s plot. Phoebe (Mckenna Grace) and Trevor (Finn Wolfhard) appear to have no idea that their late grandfather, Egon Spengler, was one of the original Ghostbusters.

However, Grooberson—a teacher who is fully aware of the Ghostbusters’ legacy and introduces it to Phoebe—should absolutely know better than to poke the belly of the beast that is a miniature Mr. Stay Puft like he’s as harmless as the Pillsbury Dough Boy.

Is the appearance of Mr. Stay Puft purely a cynical nostalgia ploy?

The actual answer to why miniature Stay Puft Marshmallow Men show up in a Ghostbusters: Afterlife could be a simple one: The film wanted to include miniature Mr. Stay Pufts at one point as a nod to the original Ghostbusters, so for that to happen, Stay Puft Marshmallows as a company still needed to exist. You can also argue that the mini Mr. Stay Pufts’ masochistic approach to human technology is ripe for memes and that the little guys are probably gonna end up as merchandise.

Whether or not those mini Mr. Stay Pufts have plot relevance beyond this snippet of a scene is a question we’ll have to wait until the movie is released to have answered.

The irony about Mr. Stay Puft is that in the original Ghostbusters, he is employed late in the film as nostalgia that just happened to be weaponized against the Ghostbusters—especially Ray.

“Tried to think of the most harmless thing,” Ray explained on why he thought of Mr. Stay Puft when he did. “Something I loved from my childhood. Something that could never, ever possibly destroy us. Mr. Stay Puft…We used to roast Stay Puft Marshmallows by the fire at Camp Waconda.”

But in Ghostbusters: Afterlife, the deployment of those Mr. Stay Pufts is a reference point, a nod to a beloved and adorable villain, and one that might not have any more reason to be there than many of the other Ghostbusters reference points we’ll see. They might not have much more to say than “remember this,” and chances are, it’ll be far from the last Easter egg to the 1984 film.

We’ve already seen what can happen to a long-awaited sequel that overindulges in its appeal to nostalgia in an attempt—no matter how conscious—to make fans of the original film happy. It doesn’t always work, it can feel uninspired or lazy, and oftentimes, it also tells us that studios may be afraid to try something that might challenge the myth of an original property. Is that the case with Ghostbusters: Afterlife? It’s too soon to tell, but given the use of the original film’s final boss as a cute Easter egg, it’s always a possibility.