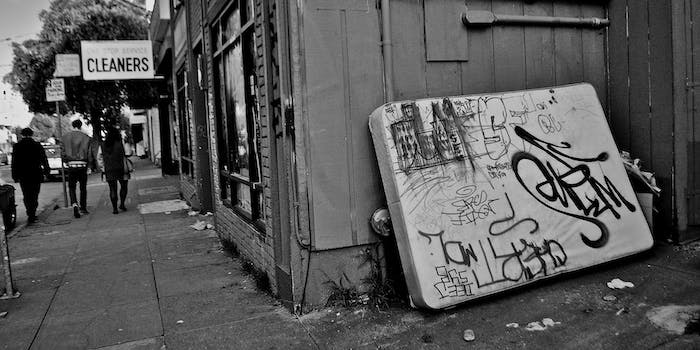 I reported this site to Google for crowdsourcing racism

See how long it took for AdSense to pull its support.

Have you ever thought to yourself, “Gosh, I wish there were an app or an informational website that would help me avoid economically downtrodden areas where visible minorities dwell, like trolls under bridges or Morlocks in the tunnels deep beneath the English countryside?”

No? Just racists, then?

Well, racists, your wish has been granted. GhettoTracker.com exists to help you and other people of easily bruised sensibilities travel without ever leaving your comfy bourgeois bubble, avoiding The Poors and others whose neighborhoods fall under the general heading of “ghetto.”

The creator of the site, who may or may not be Casey Smith of Tallahassee, vigorously denies that the site is racist, and uses his previously-deleted-and-now-re-created Facebook page to suggest that media interest in his site is a deliberate attempt to divert attention from Syria. No, we’re not kidding.

The term “ghetto” originally described the Jewish section of Vienna, although it is now largely applied to areas of poverty, particularly that of visible minorities. GhettoTracker doesn’t highlight Jewish areas, however. As explained on Gawker:

“GhettoTracker’s ‘ghettos’ aren’t identified based on mugging statistics or murder rates—or any hard data at all, really. Instead, ‘ghettos’ are determined by the site’s users and delineated by their prejudices. It’s a new, crowdsourced twist on stop-and-frisk: Just drop a little red dot anywhere you think upstanding folks should stop-and-avoid.”

Almighty Google, however, thinks people should stop and avoid racism. Last week, the GhettoTracker site featured prominent ads by Google AdSense, featuring the AdChoices logo. AdChoices is an advertising standard, something like the Good Housekeeping Seal of Approval, indicating that the ads (and the pages the ads are on) meet a certain minimum ethical and professional standard.

On Friday afternoon, I reported the site to Google by clicking on the AdChoices logo and filling out the appropriate form. It took me perhaps two minutes, start to finish, and I simply said “As extensively covered on the Huffington Post and other sites including Gawker, the site is essentially a racist travel guide.”

At 3am Saturday the ads were still up. But by noon Sunday they were gone. Monday, the site featured a diet ad by Clickbank, which is not a participant in the AdChoices program and presumably has no issue with the content or purpose of the site (I was unable to find any reference to racism in its Terms of Service). Clicking the ad, however, sends my McAfee Site Advisor into fits.

As of this writing, the Adsense ads have returned, although along with the regular rotation of skin tightening and weightloss ads, there are several (non-paying) ads for various nonprofits. That’s Google’s passive-aggressive way of saying “We aren’t outright suspending your account, but we want to talk to you about some things.”