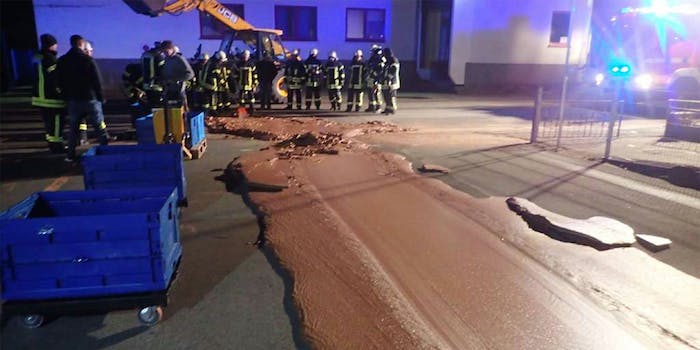 There was an emergency in the land of chocolate.

Oh, the humanity. Germany has just suffered one of the most delicious industrial spills in the world, and Twitter is eager to give it a try.

Earlier this week in Werl, Germany, a “small technical defect” in Westönnen’s DreiMeister chocolate factory brought a ton of milk chocolate out into the streets, according to The Guardian. The sugary confection soon froze to the road, posing an incredibly dangerous risk to drivers. Around two dozen firefighters were dispatched to take out the sugary mess with shovels, hot water, and torches.

Sadly, initial reports fail to disclose whether responding officers were allowed to eat the chocolate when they were done with all the hard work. Hopefully, news reporters covering the story will be given a complimentary slice.

Firefighters chip away 1 ton of milk chocolate that had flown out of a factory and frozen on the pavement in Westoennen, Germany https://t.co/34xJWRvxtl pic.twitter.com/sGIOqOEbJE

It didn’t take long for Twitter to fall in love with the mess.

Not the German chocolate 🤦‍♀️ pic.twitter.com/elOtbMxJI0

Where's Augustus Gloop when you need him…

This is literally how I would have aided the cleaning effort. pic.twitter.com/GI7Ldt8jH5

I have a team of specialist chocolate cleaners in my house if they need help. We are aged 7, 9, 36 and 42. We work for free.

The puns practically wrote themselves.

Someone give this headline writer a raise! (cc @DavidBrennan100) https://t.co/b8zx3MUy1f

Homer Simpson was right!… Germany *is* The Land of Chocolate! Mmmmmm… Chocolate…. pic.twitter.com/YtIDjAEf4x

Not to be a buzzkill, but you probably shouldn’t eat that frozen chocolate. It’s been hanging out in the middle of the road, exposed to all sorts of bacteria, and manhandled by a bunch of firefighters. It looks delicious, sure, but it’s the industrial equivalent of eating frozen chocolate off a sidewalk.

That said, if only the rest of the world could be like Germany, the world would be a sweeter place.