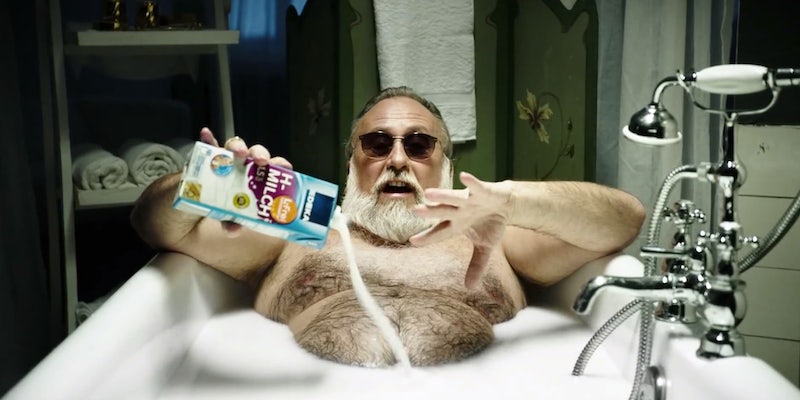 There’s a small grocery store chain where I live in Austin, Texas, that has a charming little television commercial on local stations. I used to catch it now and then, at least until I triumphantly cut my overly expensive and underly useful hookup to cable.

The ad features a person in a bespectacled rabbit suit—the store’s mascot—chipperly hopping down the aisles while employees wielding bottles of wine dance and sing in the background.

I used to think the commercial was delightfully odd, at least until I saw a new ad for German grocery chain EDEKA Supergeil. The music video-style commercial featuring Friedrich Liechtenstein has thrown down the gauntlet when it comes to strange and addictive grocery store ads.

Liechtenstein, a German musician and entertainer, lends his deep voice to a dance-worthy slow jam while bathing in a tub filled with milk and cereal and pretending to smoke a hotdog like a cigar. I can only vaguely understand what he’s singing, but I can’t take my eyes off the screen. The bar has been raised, American grocers. I’ll be awaiting your strange and wonderful response.