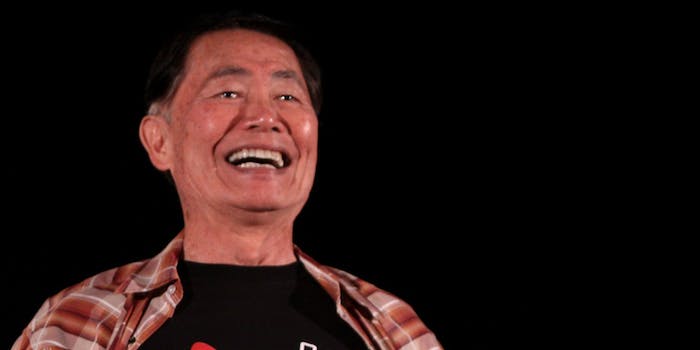 Oh my! George Takei is a master Amazon review troll

No need for much of a run-up to this story: George Takei—best known for his role as helmsman Hikaru Sulu on the original U.S.S. Enterprise—has, for the past eight months, been climbing the rankings of Amazon’s Top Customer Reviewers list.

As Jason Kottke pointed out, the former Star Trek actor is now ranked 580th Amazon’s Top 1,000 list. According to the site, these 1,000 reviewers have “helped millions of their fellow customers make informed purchase decisions on Amazon.com with their consistently helpful, high-quality reviews…They will inspire you.”

The former half of that statement is hard to prove. But the latter half, at least in Takei’s case, is completely true. In the comment boxes of Amazon, Takei wages his private battles against old age, fame, and relationship woes. On the Best of David Hasselhoff he observed, “Honestly, few Americans truly appreciate how Hasselhoff singularly reshaped the entire landscape of German music. Auf wiedersehen, Amadeus. Hasselhoff ist hier!” He praised a Deer Rear with Bottle Opener: “Mount this baby on your wall and BAMBI! Instant party.” And, In one review of a t-shirt with a giant cat face on it, Takei wrote:

“When strolling the streets of LA or braving the subways of New York City, I’m often approached by fans. They are well-meaning and always polite, but unfortunately I’m often in a bit of a hurry and don’t have the luxury to chat or pose for photos….So Brad ordered me the GREEN EYES CAT FACE by Mountain Tee [and] it worked like a charm, at least for a time. People became so transfixed by the admittedly alarming cat print that they were often too embarrassed to make eye contact with the wearer, whom they could tell was, as expected, some septuagenarian Asian person.

In all, there are 25 reviews, which means Takei is churning about three a month. I could keep listing them, but if you’ve read this far, you’re probably going to go check them all out anyway.