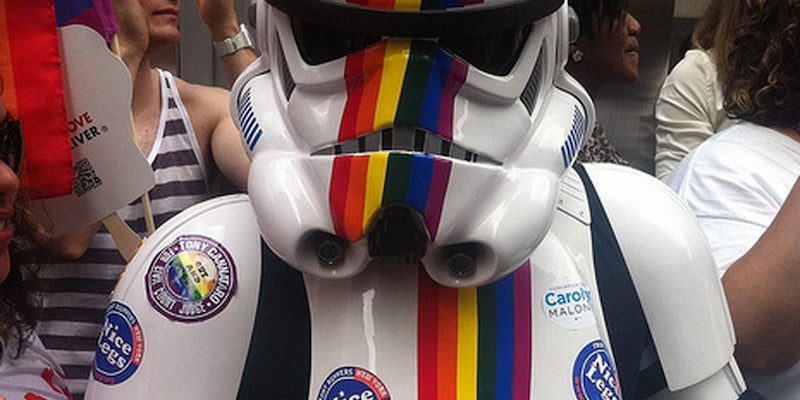 BioWare and EA, developer and publisher of the massively multiplayer online role-playing game Star Wars: The Old Republic, can't seem to win with their fans.

BioWare and EA, developer and publisher of the massively multiplayer online role-playing game Star Wars: The Old Republic, can’t seem to win with their fans.

Fans expressed their displeasure after Jeff Hickman, Executive Producer of the game, announced via blog post that they were introducing same-gender romances (SGRs) in the next update of the game.

“[I] want to reveal today that we are adding SGR with some NPCs [non-player characters] on Makeb and do intend on pursuing more SGR options in the future,” he wrote.

Hickman also acknowledged that BioWare was delivering less than what was originally promised.

“I want to apologize that this is taking so long to get in the game. I realize that we promised SGR to you guys and that many of you believed that this would be with a companion character. Unfortunately, this will take a lot more work than we realized at the time and it (like some other pieces of content we talked about earlier in the year) has been delayed as we focused on the changes required to take the game Free-to-Play. As we have said in the past, allowing same gender romance is something we are very supportive of.”

These characters will only be available via Rise of the Hutt Cartel, an expansion pack to be released in Spring 2012, meaning that players will have to pay to be gay in the game. SGR will also only be limited to Makeb, a planet that has been dubbed as a “gay ghetto” by multiple media outlets.

The announcement has drawn criticism from both sides. On one hand, BioWare and its parent company EA have received multiple letters condemning their decision, the bulk of them coming from the Florida Family Association, a conservative organization that’s against marriage equality.

Dissatisfaction of the move has also been manifested in the form of comments on the Star Wars: The Old Republic forum, though these don’t seem to be homophobic in nature.

“Seriously, SGR is one of your top priorities? I think you need to check your priorities there are many other things that take precedence over something so ignorant,” stated user gilefor.

There are also those, like subscribers to the r/gaymers community on Reddit,  who feel BioWare’s move is half-baked.

“Now personally, I’ve never had much interest in the game, but the principle of the thing, that the opportunity to pursue a same sex romance is exclusive to paid DLC, is just plain ol’ infuriating,” noted RubberJustice, who posted a self-thread on the subreddit. “Bioware built a closet and said, ‘If you’re gonna be gay, go do it over there.'”

“[It’s] just kind of sad that same-sex relationships must always be an afterthought in most popular games,” commented Athildur, “something to be discussed and possibly included at a later time, because heavens forbid you actually do things because they’re right and proper rather than thinking about how much of a PR nuisance it might be.”

To their credit, BioWare has been one of the few video game developers to include SGR in their Mass Effect 3 and Dragon Age. But as Patricia Hernandez of Kotaku writes, this type of inclusion might just stem from the company’s desire to increase their bottom instead of actually being progressive.

“It’s a business; decisions have to be practical,” argues Hernandez. “We can’t talk about things like inclusion without justification that spans beyond the ideological to come up.”

Regardless of your stance on the issue, Bioware’s decision has been less than stellar.