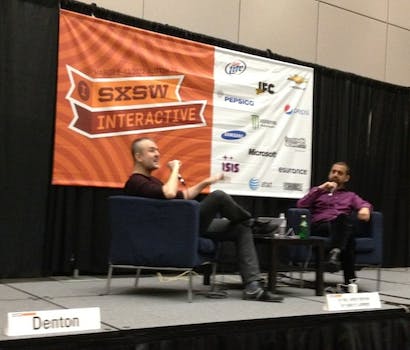 Too often, the drama-filled discussion sections of website fall from tragedy to farce. The founder of Gawker Media thinks he has the fix.

Gawker Media founder Nick Denton has a solution to the problem of comments on blogs, he said in an on-stage interview at South by Southwest, and will reveal it on his flagship site, Gawker.com, in six weeks.

Blog pioneer Anil Dash interviewed him. It  was a conversation 10 years in the making.

In 2002, here in Austin at South by Southwest Interactive, Dash met Denton, a Financial Times reporter turned entrepreneur. Denton hadn’t yet launched his online publishing venture, Gawker Media, but would months later; Dash would join Six Apart, one of the first blog-software startups, the following year, as its first employee.

We can blame them both, in other words, for the mess that has ensued. Comments on blogs and other Web communities are mostly a mess: uncivil, insipid, and unmanageable.

Most of Gawker’s websites are cases in point, despite Denton’s longstanding attempts to reform their commenting communities through the clever use of technology.

(A disclosure: Denton and I have been friends, or friendly at any rate, since 1998. Dash, likewise, is a longtime friend. Denton hired me in 2007 to run Valleywag. I worked for him for two years. As a result of my employment, I came to possess shares in Gawker Media and a dismal view of Gawker’s commentariat.)

In a blog post he published last year titled “If your website’s full of assholes, it’s your fault,” Dash put the responsibility on publishers for the “hateful behavior” in comments, citing in particular Google for its laissez-faire approach to YouTube.

Denton called the state of affairs “the tragedy of the comments,” a reference to the economic concept that public resources rapidly fall to overuse and neglect. He also said that current approaches like moderation or a reliance on third-party sites like Facebook to identify commenters were inadequate.

So he’s been having Gawker’s technology team roll its own.

“The core of the Gawker idea that we’re building, that will launch on Gawker.com in about six weeks, is that everyone owns the thread they start,” said Denton.

The commenting system, which will later be introduced across Gawker’s network of eight sites, will both allow only invited commenters to comment on particular posts and will allow commenters who start a thread to control who can reply, accepting or dismissing their responses. (Dismissed comments won’t disappear altogether, but they won’t be linked to other comments in that thread.)

“I want the sources, the experts, the authorities to comment on discussions,” said Denton.

He called the community that had formed around Gawker’s current commenting system a “commenting clique.” Denton also said that some sites could be hostile to the sources and subjects he wanted to come and comment on the site, giving the example of Dov Charney, the outspoken and ill-behaved founder of American Apparel who has been much covered in Jezebel, Gawker’s site for women.

“If Dov Charney went into the Jezebel comments, he’d be torn limb from limb,” said Denton. “And not just the limbs.”

Writers, too, have been the subject of commenters’ hostility.

“I’ve seen writers cry” after reading comments,  he said. The new system, he hoped, might “actually soften that divide between editors and commenters” and allow them to “share responsibility and ownership” for the quality of conversation on Gawker’s sites.

I came away from the discussion with just one concern. Denton’s clearly focused on that word: “conversation.” But that’s not all that happens in website comments.

People sometimes go off topic, yes. Sometimes they even fall in love.

Gawker’s new comment system may keep the discussion more on track. That in turn may make for a better media product. But it may stifle the small talk that creates bonds between people. Call it a clique, or call it community.