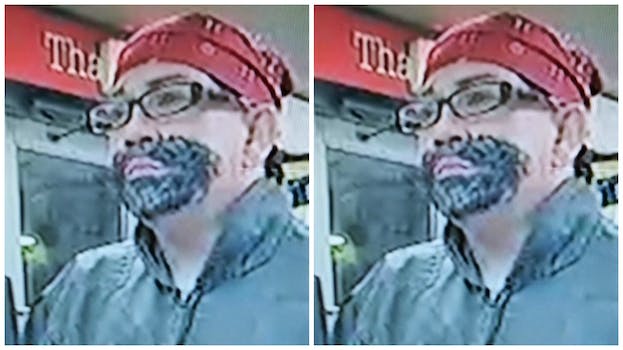 If you’re going to rob a gas station, a disguise is imperative. A fake beard, perhaps. Maybe a Groucho Marx-style mustache and glasses combo. Or perhaps a Patrick Swayze-inspired presidential mask.

Either way, robbers need to think about how to get away from their crimes undetected in order to enjoy the fruits of their illegal labor.

It looks like the person below thought about that. But the suspect’s idea was a little lacking in execution. How else do you explain a beard that appears to be, um, drawn on the face?

Either that or the suspect just stuck his face in some chocolate pudding, eschewed a napkin, and figured that’d be good enough.

This incident occurred in—you guessed it—Pasco, Florida, and as of Thursday, the sheriff’s department was unsure whether the suspect was male or female.

It’s also unclear if the suspect got away with any cash from the attempted robbery. But it should be relatively easy to get rid of the disguise. All the person needs is some soap and water. Unless, of course, the suspect used permanent marker, which would be really special. Based on the shoddy disguise used in the first place, that kind of ineptitude would not be a surprise.