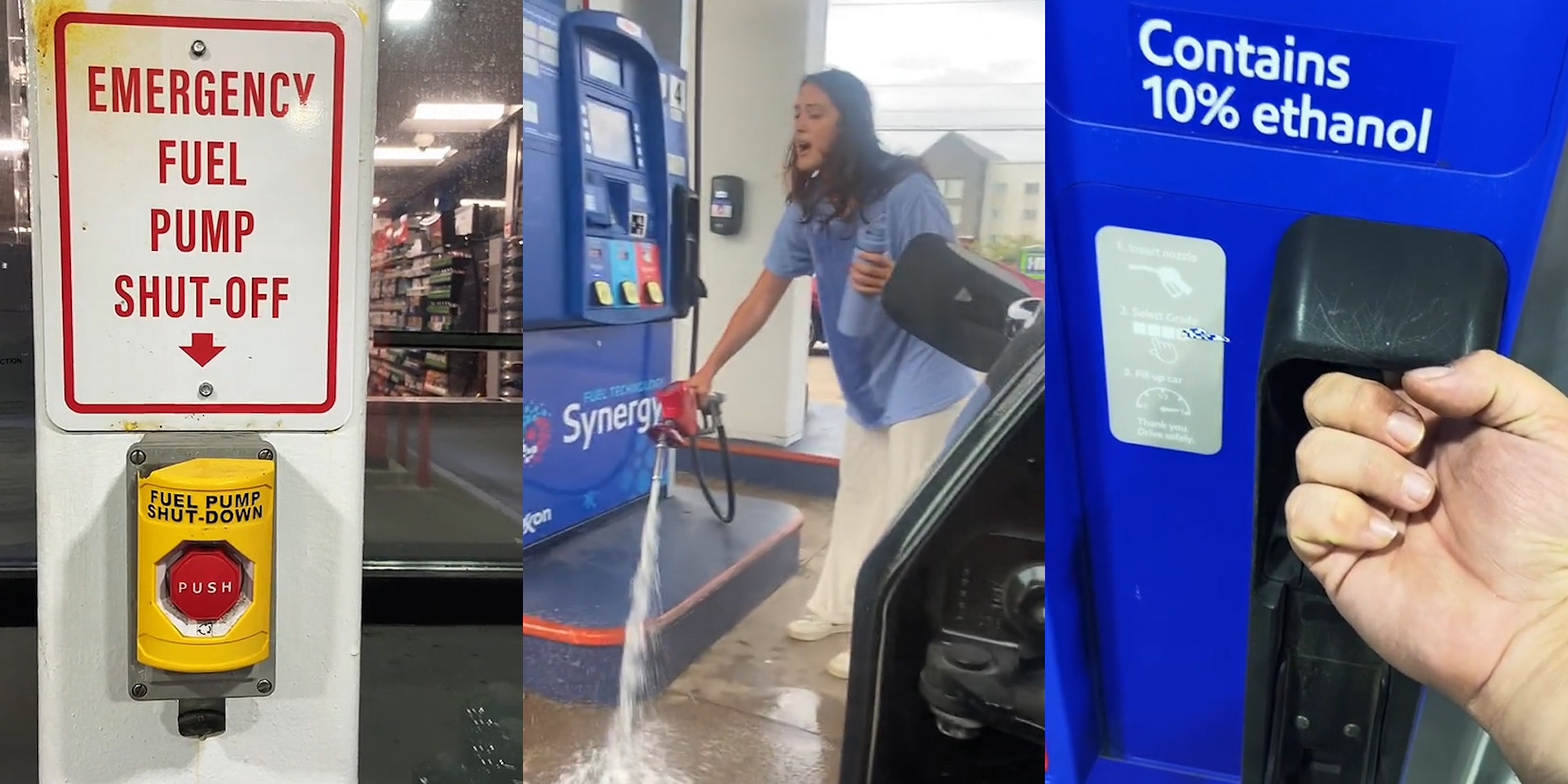 ‘They need to teach this in school’: Gas station attendant responds to viral unstoppable pump TikTok by showing viewers what to do if it happens to them

After seeing TikTok user 14slothlover11’s now-viral video of a gas pump uncontrollably spewing gas, gas station attendant therealnuriko had to make a video of his own, explaining what to do if you find yourself in that situation.

In the original video, which received more than 20 million views, we first see 14slothlover11‘s friend appear in front of the camera, drenched in something, before swiveling to show the pump where it’s been dropped on the ground, pouring gas everywhere, as her friend plaintively asks what she’s supposed to do.

Therealnuriko, who works nights at a gas station and can’t quite keep the irritation out of his voice, starts by acknowledging how scary this can feel but quickly explains there are two very quick and easy solutions to this kind of incident. First, all gas stations will have a large red emergency shut-off button which will shut down all the pumps if pressed. These buttons will also have clear, though not necessarily eye-catching, signage pointing them out so once you know they’re there and to look for them, they’re easy to locate. Meanwhile, for those who aren’t able to walk that far or at least not quickly enough to prevent a major spill, there’s also a lever inside the pump’s holster that will turn that individual pump on and off.

Therealnuriko ended his video by saying how sorry he felt for the station attendants who were going to have to call the police to get the spill cleaned up. Because gasoline is a hazardous substance, and spills are additionally dangerous because of the risk of a spark setting the entire spill on fire, cleaning up such a spill is a dangerous and specialized process.

Knowledge of the emergency shut-off buttons among the public seems patchy at best. While some people commented on the original video offering the same advice as therealnuriko, plenty of people commented that they had had no idea they even existed before watching his TikTok.

A partial clue as to why can be found in 14slothlover11 original TikTok, where she blames the incident on her friend being from New Jersey. New Jersey is one of only a few states that don’t allow patrons to pump their own gas. Instead, an attendant has to do it for them. This means that when traveling in another state they can find themselves at a loss on what to do, even without a malfunctioning pump complicating matters.

However, some people just weren’t aware, despite living in a state where they pump their own gas. Several TikTok users said it needed to be taught in schools.

And with several commenters, including other gas station attendants confirming that not all stations keep the emergency shut-off button in a place that can be seen or even accessed by anyone other than staff, it seems things are more complicated than they initially seemed. However, if you’re at a station that doesn’t seem to have the big shut-off button, you can always try the in-pump technique shown instead.

The Daily Dot has reached out to both TikTok users and will update this article if they respond.