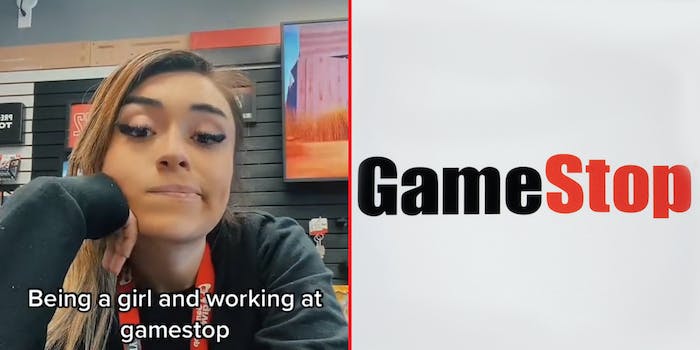 ‘What’s your gamer tag?’: TikToker documents the kinds of customers she interacts with at GameStop

It's a wide variety of annoying interactions.

The day-to-day of a retail job results in all kinds of customer interactions to the forefront, but in one viral TikTok, it’s the assumptions that people make when they see a female GameStop employee.

In a video posted on Wednesday, TikToker @ikissedsafiree documented the different types of customers she sees when she works at GameStop. She kicks off the video by looking directly into the camera before it cuts to a series of stock photos.

“Being a girl and working at gamestop,” she wrote at the start of the video, which is set to Keith Whitley’s “Miami, My Amy.”

The video runs through the gambit, showing everything from a grandmother asking to get a Mario game on the Xbox to a man asking for her gamer tag to a mother who asked, as the caption reads, “Are you sure you know what you’re talking about?”

For some, the chronicle of various interactions was more than familiar.

“Worked for GS for 9 years,” @@thejetttt commented. “Was an ASM. Can confirm this is how the female employees were treated. I usually stepped in if I could.”

“It’s really not as bad as people make it out to be or at least it hasn’t been for me,” she responded to another comment. “The last one only happened twice—both from moms.”

@ikissedsafiree isn’t the only one documenting what it’s like for girls and women who work at GameStop. TikToker @nes.ttv has been documenting the many types of interactions she faces over the past few weeks in a style that echoes @ikissedsafiree’s video.