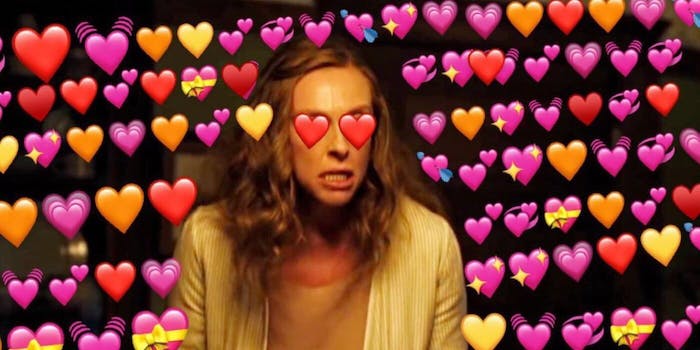 It's a fitting quarantine refrain.

Gal Gadot took a well-intentioned swing and miss last week when she enlisted all her famous friends to sing an a cappella version of John Lennon’s “Imagine” that was tone-deaf in more ways than one. But if Gadot’s cringeworthy Instagram video left any cultural impact, it was a slew of parody videos in its wake, from Smash Mouth’s “All Star” to Blink-182’s “I Miss You.” Twitter user Austin Harris added one more brilliant compilation to the mix: an ensemble performance of Toni Collette’s “I am your mother” monologue from Hereditary.

Harris’ choice of monologue feels appropriate, given the turbulent times. Many people likely feel on the precipice of a breakdown or outburst as they adjust to spending all day in such close proximity to their loved ones.

Here’s the full transcript of Collette’s gloriously unhinged monologue, directed at her son during dinner:

Don’t you swear at me, you little shit! Don’t ever raise your voice at me! I am your mother! Do you understand? All I do is worry and slave and defend you, and all I get back is that fucking face on your face! So full of disdain and resentment and always so annoyed! Well, now your sister is dead! And I know you miss her, and I know it was an accident, and I know you’re in pain, and I wish could take that all away for you. I wish I could shield you from the knowledge that you did what you did, but your sister is dead! She’s gone forever! And what a waste. If it could’ve maybe brought us together, or something, if you could’ve just said ‘I’m sorry’ or faced up to what happened, then maybe we could do something about this, but you can’t take responsibility for anything! So now I can’t accept, and I can’t forgive. Because… because nobody admits to anything they’ve done!

Since Wednesday, Harris’ video has racked up 1.4 million views, 89,000 likes, and 24,000 retweets. A24, the distributor and production company behind Hereditary, shared the video on its own Twitter account, as did Rotten Tomatoes.

Some viewers even noted the wardrobe parallels between the video’s penultimate actor, Analisa Gutierrez, and Gadot in her “Imagine” video.

Quarantined folks looking to occupy themselves, take note: This is the way to do it.