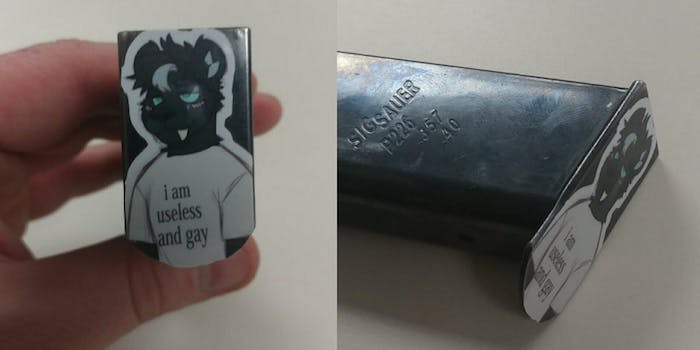 This is a wacky Twitter tale for the ages.

Somewhere out there, a cop has a gun with a gay artist’s “fursona” plastered on his magazine—yep, his furry persona—and Twitter is having a field day.

Jean Baxter Todd, a gay Argentinian artist living in Rio de Janeiro, Brazil, first posted a video on Thursday showing an American police officer filling out paperwork. A close-up of the cop’s holstered firearm reveals a sketch from Todd on the bottom of his magazine—and it’s Todd’s fursona with the caption “i am useless and gay” written on its shirt.

“I don’t know what’s worse, the fact there’s someone out there selling stickers of my art and a fucking COP bought one to put it on his gun, or the fact someone actually recognized it as my art when they saw it,” Todd tweeted.

Soon, Todd’s tweets blew up, causing the internet to wonder why a cop would have a gay fursona on his magazine. And that’s when the police officer in question contacted Todd. Yes, the tweets found its way to the owner of the fursona-decorated gun.

“Dude my buddy made a few stickers to throw on his computer and I was like ‘I want one,'” the officer told Todd, “and then the department made some dumb policy to identify our magazines in the case of an [officer involved shooting]. So… that was my identification because… I’m gay and it’s funny.”

Even with the mystery brought to its conclusion, Twitter walked away with more questions than answers about the cop.

this is a brave new world

Of COURSE IT'S MY FRIEND. OF COURSE. He just sent this to me and went "oh no this is me"

I’m losing my mind, there’s one (1) good cop out there

Todd’s followers went on to show off other furry-based firearm decals too, albeit some more realistic than others.

Still waiting on the sbr stamp so the upper isn't final. This is the configuration I took to desert brutality sans the D60 pic.twitter.com/Tz6GP6ox3Z

And here I was, thinking putting the foxhound logo except it’s Sabrina Skunk on my pistol would be “too much”. I am no longer afraid pic.twitter.com/pZdSrDl74C

At any rate, it seems Todd’s fan in the American police force will have plenty of furries to hang out with at the shooting range. That sounds just like Zootopia, right?