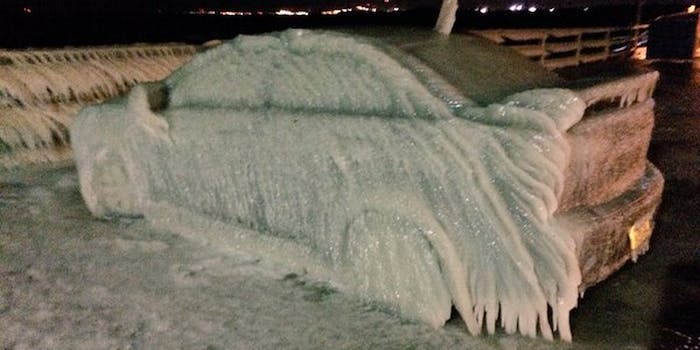 One dude’s car has all the chill.

24-year-old Justin Yelin of Hamburg, New York, left his car out earlier this week in a restaurant parking lot on the shores of Lake Erie. When he came back to his vehicle, he made a chilling discovery: His car was encased in ice.

Local news reporter Matthew Bové tweeted a pic of the car that went viral and even showed up on Good Morning America.

What happens when you park your car near Rt. 5 @WKBW @7FirstAlert #Buffalo pic.twitter.com/lEqoOXHlz8

Hannah Buehler, another local news reporter, tracked down Yelin to get his thoughts on the whole situation. He might think it’s “pretty cool,” but now he has to rely on mom and dad for a ride.

Looks like he’s on thin ice with his parents.