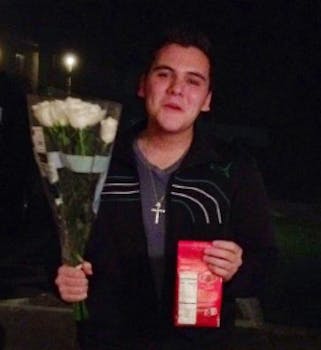 Here's the story behind the latest and greatest meme.

For most guys—and especially users of social news site Reddit—there’s nothing worse than landing in the friend zone, that purgatorial realm where a guy gets pegged as a platonic and nothing more.

But for 18-year-old Johnny Solis, being friend-zoned was the least of his problems.

Early Sunday afternoon a Facebook photo of Solis holding flowers and what looks like a box of chocolates outside a girl named Lizz’s home surfaced online. The photo featured the following comment from Lizz: “This is how you do it. He comes to my house at midnight to wish me a happy birthday (: I am so blessed to have such great friends. Thank you sososoo much Jonathan! Ily” 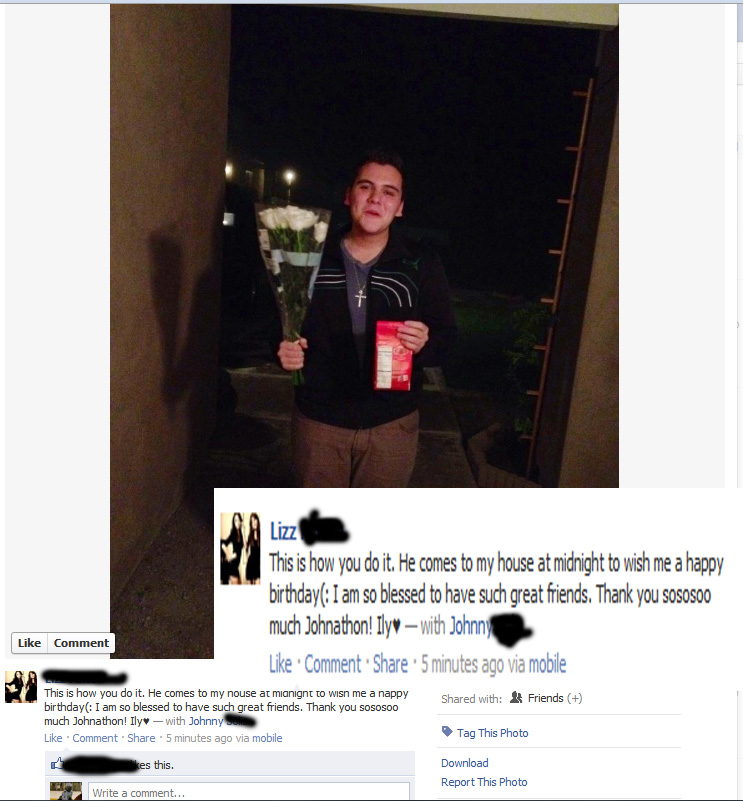 The photo was a huge hit on Reddit, where it was posted with the title “Friendzone level 99.” The thread collected more than 2,600 comments, with users sharing other friend-zone moments, advice on how to get the girl, and sadness over Solis’ situation.

About six hours after the post took off, Solis broke his silence in a IAma thread where he posted a link to his Facebook page and a profile photo of him holding up a card with his Reddit name on it.

While the Daily Dot has reached out to Solis for comment, his exchange with redditor NuclearPotatoes put matters into perspective. Redditor fatalentity translated Solis’ response into normal, written English. Read those here if you have trouble following the exchange.

In the meantime, it’s safe to say that Solis has earned a place among the top friend-zoned memes in history. And if he’s lucky, that’ll be enough to get him out.

Q: Do we have it all wrong? Are you even in the friendzone?

A: yes u have it all wrong, u ser my friend lizz’s father passed away and I have been trying to be there for her so on her birthday I decided to go buy her flowers cyz that’s the only thing I could think of…

Q: How did it go once you got to the house?

A: Once I got to her house she was sleeping so I just went told her happybirthday we took picture and went on with our lives. I wasn’t trying to get some haha

Q: What was your reaction when you first saw the post “Friendzone level 99”?

A: MY First reaction was to laugh at how shit like this can happen just because u care about a friend, and happy I’m sorta infamous haha

Q: How has your life changed since the creation of this meme?

A: My life hassnt changed everyone at school knows were close friends

Q: What does the chick think about the situation?

A: She was felt sorry and was  sad but its no biggie haha Itss funny cuz nothing everyone posted ia true x)