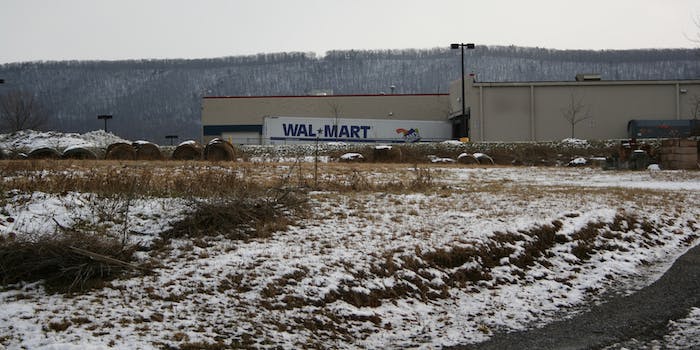 Activists have usurped “Wally & Marty,” the characters introduced by Walmart in 2006, to promote better wages for employees.

At this time of year, you can hardly escape seeing elves. They’re everywhere: in holiday cards, the mall, on your neighbor’s lawn, and in ads for Walmart.

“Wally & Marty” were introduced by the corporate retailer in 2006 as “renegade” elves, “synonymous with holiday spirit.” The characters, however, have taken on a life of their own at the hands of protesters, who are attempting to make the two synonymous instead with the fight for better wages and conditions for Walmart employees.

The movement’s called #FreeTheWalmartElves. It’s being staged across social media platforms and parking lots around the country. The protests have intensified in reason weeks, especially in light of Walmart asking employees to contribute to a food bank for their fellow workers who were not making enough to buy necessities.

A top activist in the protests, who spoke on the condition of anonymity, told the Daily Dot, “A main message of the #WalmartElves movement is: ‘Elves don’t exist! The workers, who deserve a living wage, are not elves.’”

The movement started last year on Twitter, when Walmart tweeted that people should ask for gift suggestions using the hashtag #WalmartElves and promised Walmart staffers would answer. The hashtag quickly spiraled out of corporate control.

Do you need a gift idea? Use #WalmartElves and we’ll help! #BlackFriday

@toxiczarry @Walmart I suggest a union!

Activists registered parody accounts in droves to dominate the conversation online: In a matter of weeks, however, @TheWalmartElves, @NoWalmartElves, and a half-dozen others were created suspended for violating the company’s impersonation policy.

The Walmart Elves turned to Tumblr, but their original page was short-lived.

In a document released on Scribd, the activists revealed a series of letters sent to Tumblr by Walmart, asserting the company’s trademark. The documents revealed just how closely Walmart is following the protests. The document listed the groups action’s in its complaint, which included replacing official store signage with similar-looking signs saying things like “$8.81 is not a living wage” and “Walmart is using its wealth and power to silence workers demanding a living wage.”

In mid-November, shortly after Walmart contacted Tumblr, the protest site walmartelves.tumblr.com was suspended. An alternative parody site, Elves on Strike, now resides in its place. At the moment, the activists also have @ElvesOfWalmart and  @ElvesOnStrike_, along with support from similarly minded activist groups on Twitter. Eight accounts remain suspended.

On Black Friday and every day leading up to and including Christmas, the group is calling on the public to show support for the living-wage campaign by using the hashtag #WalmartElves, by spreading two QR codes that lead to the blog, and by scrawling the hashtag and related messages anywhere there’s a flat surface. Their Tumblr lists a page of “culture jamming” supplies, including print-outs, QR codes, and fake signs.

“Chalking #WalmartElves in a Walmart parking lot will hopefully inspire shoppers to search the hashtag and see that elves do not exist, but workers who deserve a living wage do,” our source said.

There’s also a Facebook event that directs people to the Black Friday protests website, offering more detailed instructions on how to support job action at Walmart today. The map pinpointing sites where actions are taking place is a dense field of red pointers tiled like shingles throughout the Midwest and East Coast, scattering across the plains and clustering again along the West Coast.

While the #WalmartElves are most prominent during the holidays, the activists consider this to be a long-term endeavor, one that’s committed to fighting censorship and for workers’ rights.

“The work of #WalmartElves,” our source said, “will never be done as long as Walmart treats workers unfairly.”