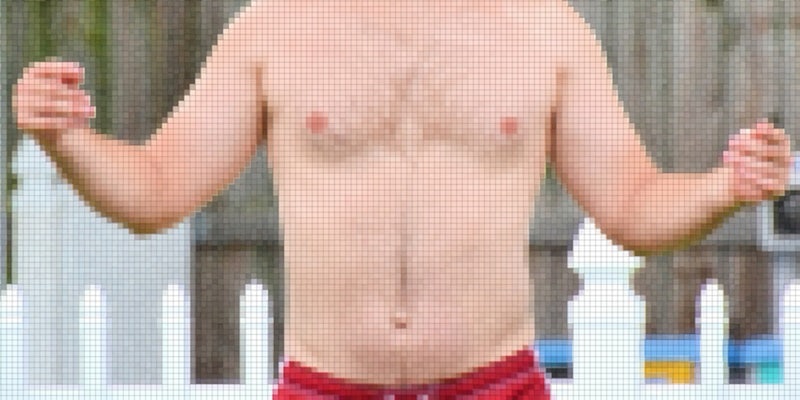 Say goodbye to these, Facebook. Because it's the last time.

Here’s a riddle for you: You’ve probably put them in your mouth hundreds of times but you can only see them on Facebook if they’re in somebody else’s mouth.

What am I referring to? Female nipples, of course.

Nipples might seem inoffensive, even cute, but even the tiniest of teats has the power to generate an enormous controversy. Recall that the mere sight of a nipple in Janet Jackson’s 2004 Super Bowl halftime show cost CBS half a million dollars in fines from the Federal Communications Commission (FCC).

A decade later, in the heyday of social media, the female nipple continues to be taboo. As The Hairpin’s ten-year nipple retrospective reminds us, publications and public figures from The New Yorker to Rihanna have been banned and censored by social media services like Facebook and Instagram. It was only this summer that Facebook finally lifted its ban on exposed nipples in breastfeeding photos after a long campaign by feminists and mothers (and, of course, feminist mothers). A woman’s nipples, it seems, still contain the power to cause moral panic.

It seems counterintuitive that female nipples on television and social media would still be off limits when virtually every other non-genital area of a woman’s body can be publicly displayed with impunity. We’ve certainly gotten close to the nipple; in fashion, we’ve been drawing circles around it for centuries. We’ve gone from traditional top-down Victorian cleavage to the “underboob” of 1980s crop-top fame to the “sideboob” of the 2010s. Top, bottom, side: we’ve explored the exposure of every part of the breast except for the sweet center.

Sure, every few years we coyly try to “free the nipple” but it never sticks. Sadly, we might never be able to walk around wearing shirts that only expose the nipple like Regina George does in Mean Girls.

Men’s bodies, on the other hand, can only be “naked” if their genitals are exposed. Men fall under a strict nudity binary, too. They’re either naked or they’re not: there’s no such thing as “sidepenis” or “underballs,” and if there were, we’d all probably convulse with horror.

But men’s nipples are allowed everywhere on the Internet: Facebook, Twitter, Instagram—hell, even LinkedIn, if you’re feeling risqué or Google+ if you want to hide your nipples from the world. Men are also free to walk around shirtless in public as long as they don’t enter businesses that enforce “no shirt, no shoes, no service” policies. Even though it is technically legal for women to do the same in most states, we would still, as the Go Topless movement notes, have to be prepared to be arrested for “disorderly conduct” and sue our municipalities for wrongful arrest.

So in a nation where men’s nipples can skitter freely across our Facebook feeds and some women are starting to go topless in public, why can’t we see women’s nipples on most social media networks outside of the context of breastfeeding?

Instagram and Facebook are light on specifics. Instagram’s community guidelines ban “nudity” but don’t provide any further details, opting instead to rely on implicit social conventions. Facebook, on the other hand, makes the breastfeeding exemption clear while “impos[ing] limitations on the display of nudity,” without clarifying what those limitations are. In practice, though, we all know what these guidelines mean: your friend Josh can flex his pecs in tropical vacation photos, but your friend Alice can’t have an exposed nipple anywhere in her albums.

At some point, the internal logic of these policies fall apart if you examine them too closely, if you try to understand the rationale behind these implicit limitations. First, these policies assume that women’s nipples are inherently sexual. While straight men seem to perceive women’s nipples in this way most of the time, as women, we tend to see our nipples as parts of their body that are sexual in some contexts, maternal in others, and that are otherwise completely banal. And, according to the weird logic of Facebook, a baby’s mouth can instantly transform a nipple from an unseeable symbol of sexuality into a chaste maternal fountain.

In other words, Facebook and Instagram’s perception of female nudity is undeniably shaped by the straight men who found and run social media services. Facebook, for example, is almost seventy percent male. Twitter, too, is seventy percent male. What this means is that, even though women use social media more actively than men, the social norms of the services they use are largely determined by straight white men. As women, we live, play, and communicate according to rules determined by straight male attitudes.

The question then becomes: Why can’t straight men see a woman’s nipple as anything other than sexual? For one, female nipples occupy a precarious space between sexuality and maternity in the male imaginary. Nipples are typically attached to breasts which men can safely eroticize, but after childbirth, their new function in childrearing establishes a multi-functionality for the breast that straight men can’t quite seem to comprehend. In other words, the female nipple marks a contradiction in men’s understanding of women’s bodies. It marks the uncomfortable intersection of sexuality and maternity in a patriarchal world that must keep the two separate.

In other words, nipples are the epicenter of what Freud might call the “Madonna-whore” complex, men’s hypocritical tendency to perceive women as either sexual objects or untouchable maternal saints. This complex puts pressure on women to be able to quickly vacillate between sexuality and maternity at a man’s whim. But the nipple is simultaneously unapologetically sexual and potentially maternal and, because of this dual quality, it literally defies straight men’s ability to comprehend and categorize women’s bodies. The nipple, for them, is literally an unanswerable riddle, at once reminding them of the sexy breast and the breastfeeding breast.

When we understand that straight men see our erotic zones as yo-yos that we whip out and retract for their amusement, Facebook and Instagram’s anti-lady nipple policies begin to make a lot more sense. Men need to hide parts of women’s bodies from public view so that they retain their sexual charge in private settings. If we posted topless photos of ourselves en masse, we would be issuing a fundamental challenge to straight men’s bizarre (but sometimes adorable) need to play peekaboo with our bodies in order to find them attractive. “Here are my nipples! Now you see them, now you don’t!”

It’ll be a long time before we start seeing topless photos on services like Facebook and Instagram. The fundamental social attitudes of social media services would have to change which would require a concomitant shift in their hiring practices and corporate culture. And we’d have to want to post topless photos of ourselves online. But while we wait for permission from our paternalistic social media overlords, at least we have some idea why our nipples aren’t able to be seen.