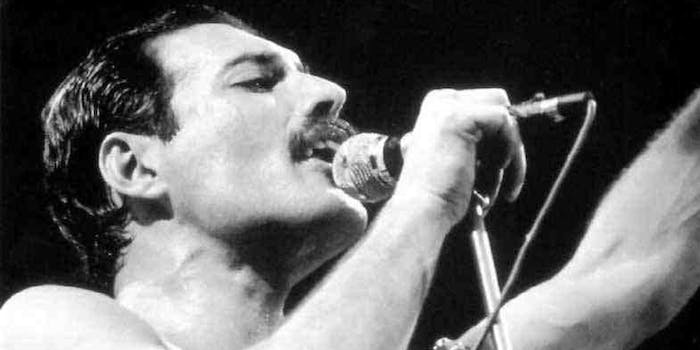 Internet celebrates Freddie Mercury with “Freddie for a Day”

A charity-focused tribute to Queen's late frontman took over the web on Wednesday.

Freddie Mercury may be long gone, but his legacy lives on in several Internet communities.

“Freddie For a Day” was set up for fans to pay tribute to the late Queen lead singer, who died in 1991 due to complications from AIDS. Coinciding with Mercury’s Sep. 5 birthday, the event is described as “fun, it’s slightly crazy AND it raises money for the charity which is spent fighting HIV/AIDS worldwide.”

On YouTube, several users uploaded videos of themselves dressed as Mercury. Perhaps the most popular of these, with over 1 million views, featured Angry Birds.

The tributes continued on Twitter. According to Topsy, the phrase “Freddie for a Day” was used over 700 times in the past 24 hours. Twitter users tweeted photos of themselves sporting Mercury’s signature mustache and loud clothing to the organization’s official Twitter account.

The Facebook fan page for the event, which currently has over 35,000 likes, displayed a handful of photos from participants. A photo of several Carlton Books staffers received 700+ likes; Carlton Books is the publisher of Freddie Mercury: The Great Pretender, scheduled to be released on October 2, 2012. Additionally, the page listed various charities using the day to raise money for their respective causes.

Freddie For a Day was organized by Liz Swanton, web editor of Mercury Phoenix Trust, a charity set up in Mercury’s name to raise funding for AIDS research.