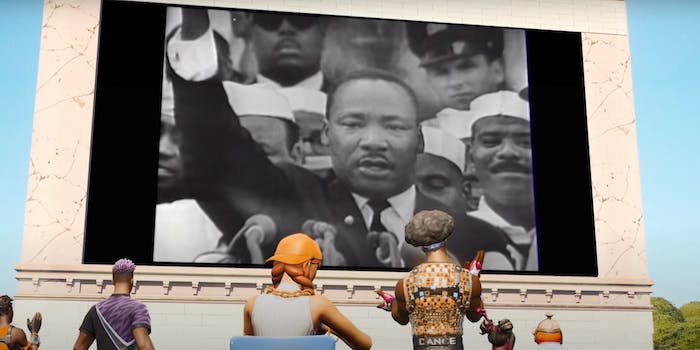 Some players are dancing during the experience.

In a collaboration that sounds as if it’s straight out of Mad Libs, you can now watch Dr. Martin Luther King Jr.’s “I Have a Dream” speech in the popular online game Fortnite.

The experience, which was launched in Fortnite on Thursday, is a partnership between Fortnite Creative and TIME Studios that transports players to the Lincoln Memorial and the National Mall in Washington, D.C. where they can watch King deliver the “I Have a Dream” speech. They’ll also be able to explore the history around King and the Civil Rights movement, and they’ll receive a “D.C. 63” spray for their lockers after completing several challenges.

“The experience extends with museum-inspired points of interest, and collaborative mini-game quests you complete with others,” the press release from Epic Games reads. “These activities progress players through the experience and bring to life important themes of Dr. King’s speech: we move forward when we work together.”

A short preview of the new experience showed various Fortnite characters watching the speech unfold at the National Monument and walking around the museum respectfully.

The reality, given that the interactive King experience is set within Fortnite, is that there was plenty of confusion as to why King was in Fortnite in the first place and some incredulity after going through the experience.

If you were wondering, you can make your characters dance in Fortnite’s King interactive experience, so it wasn’t uncommon to see someone wearing, for example, a Rick Sanchez skin and dancing as the speech played. But there were some limits to what players could do; for example, you couldn’t throw tomatoes while in the experience.

There were also some jokes about some of Fortnite’s younger players learning about King through and the possibility of citing him as a Fortnite character first and a Civil Rights leader second.

The King Center, a nonprofit organization founded by Coretta Scott King in 1968 that aims to “​​empower people to create a just, humane, equitable and peaceful world by applying Dr. King’s nonviolent philosophy and methodology,” distanced itself from Fortnite’s King experience, which it said it had nothing to do with creating.

“The King Center does not license Dr. King’s intellectual property, and, therefore, was not involved in any decisions concerning the endeavor with TIME Inc and PlayStation/Fortnite,” the organization tweeted. “These licensing decisions are made by Intellectual Properties Management (IPM).”

Bernice King, the CEO of The King Center and King’s daughter, added that “Decisions around licensing my father’s intellectual property are outside of my personal purview.”

Your mileage may vary on how successful or respectful the new Fortnite experience might be, but even the jokes highlight a potentially depressing point. It’s possible that some kids will learn about King and the Civil Rights movement—even the basics—in Fortnite as opposed to a classroom if their schools eventually stop teaching students about King and the Civil Rights movement (or present it in whitewashed terms) in response to legislation concerning critical race theory.