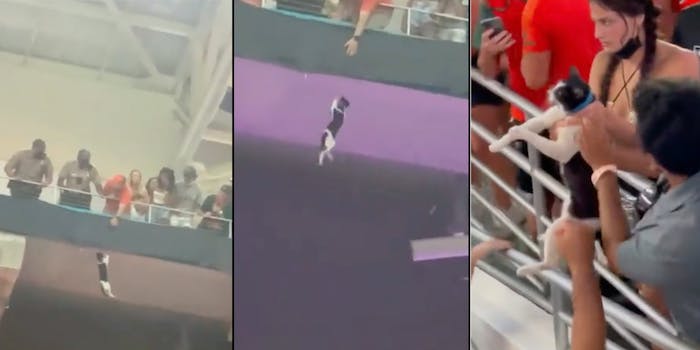 ‘We wish the cat the best in his remaining eight lives’: Football fans save falling cat with American flag in viral video

'It was hanging by a wire.'

The Miami Hurricanes opened up their 2021 college football season Saturday night against Appalachian State, and a cat took center stage—become an overnight viral sensation in the process.

As Local 10 reported, “During the first half of the Canes home opener, fans sitting in the west end zone began to notice something a little out of the ordinary.

“Somehow, a cat not only got loose in the stadium, but it was hanging by a wire that was dangling off the upper deck.”

The story noted that while some mobilized to record the cat dangling over a section of fans, those fans starting spreading out flags they brought into the stadium, aiming to catch the cat if it fell.

Danny Rabinowitz with WQAM-AM in Miami tweeted a video of the cat dangling, which garnered an amazing 5.8 million views in its first 14 hours on the platform.

Documentary director Billy Corben shared an alternate view of what transpired on his Twitter account. That showed the cat dropping from its precarious position, but being caught in a flag by fans below, then triumphantly hoisted aloft to celebrate the cat clearly having nine lives.

He dubbed it, “Alternate angle of the biggest highlight from tonight’s Miami Hurricanes-Appalachian State game at Hard Rock Stadium as a cat falls from the upper deck and is caught by fans in an American flag,” and then finished it with his signature hashtag, #BecauseMiami.

The video also crossed over to several Reddit subreddits dedicated to public freakouts, including r/ActualPublicFreakouts, where one Redditor shared video with the erroneous caption, “Fans save a falling cat with an American flag at a baseball game.”

Commenters on both Reddit and Twitter registered alarm at what one Redditor labeled the “Lion King treatment,” though that commenter got who held up Simba wrong.

Someone responded to Corben by observing, “Great they saved the cat, but why traumatize it afterwards? That cat was freaked the f*ck out when the guy was holding it up in the air like a trophy.”

But not everyone was as outraged by the Simba treatment. Someone on Twitter sharing video observed, “I had to add the lion king song to this cat falling at the Miami game & getting picked up like simba.”

The stadium’s official Twitter account noted, “We are happy that due to the heads up nature of fans in sections 107, 110 & 208 the cat landed safely after a harrowing fall.” Then, being positive-assumptive, they added, “We wish the cat the best in his remaining eight lives.”

And one enterprising reporter, David Wilson, tracked down the cat rescuer. As he revealed on Twitter, “I talked to the Miami couple who used their American flag to save a falling cat in the fourth quarter. One of them is a UM facilities manager. They have the flag at every game. They also got peed on in the process.”