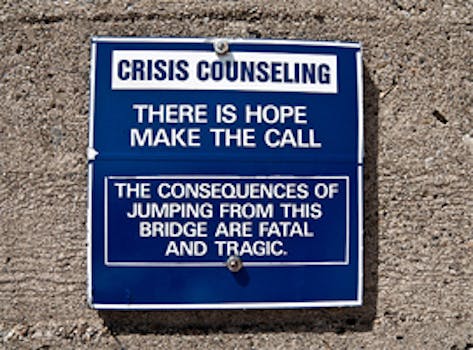 A Dublin radio station is under fire after its handling of an on-air suicide call that lasted over an hour and trended on Twitter in Ireland.

A Dublin radio station is under fire after its handling of an on-air suicide call that lasted over an hour and trended on Twitter in Ireland.

The caller, identified as Jay, eventually came down from the bridge he was standing on when he called the radio talk show and demanded to be put on air.

While the nightly FM104 Phoneshow was being broadcast, alarmed listeners across Dublin tuned in as the caller informed host Jeremy Dixon that he was standing on the ledge of an overpass, holding a knife.

As Dixon attempted to talk the man down on air, the Irish police force, known as the Gardai, were called to the scene. So were the man’s parents. Traffic was halted. According to reports, the man could be heard yelling angrily at the police to stay off the bridge.

“I’m not qualified to deal with this,” stated a clearly emotional Dixon while the call aired. Though the caller eventually hung up, around midnight he was talked down from the bridge.

The incident caused the hashtag #FM104 to trend in Ireland on Twitter, and the subsequent publicity left listeners squarely divided over the incident, flooding the radio station with complaints. “#FM104 kept a caller who was threatening suicide on air for an HOUR & even went to ad break during?” read one typical reaction. “Distasteful & voyeuristic.”

But others sided with the studio, arguing that airing the call was the responsible thing: “Imagine what could have happened if they said no?”

Reports on Twitter alleged that the caller had threatened suicide at this same bridge four times within the previous month, and that the radio station had not actually halted his behavior.

At the center of the controversy, Dixon, who tweeted that he was “completely drained” after the night, stated the following morning that the radio had “no other way to deal with” the call but to air it:

He wanted to talk to FM104. He didn’t ring anybody else, he didn’t ring his family, he rang FM104. … When someone rings and they feel as desperate and that, there is only one thing to do and that is to talk to them. … Hopefully it has worked.

Still, criticism of the decision to air the call remained fierce—especially for its decision to take an ad break in the middle of the call. Irish Parliament member Finian McGrath called the station “grossly irresponsible.”

“This smacks of what happened recently to those crank call radio DJs in Australia and the nurse in the UK. No lessons learned,” tweeted one listener.

“#fm104 had NO choice in broadcasting that call,” responded another. “They risked their license for it. He threatened suicide if they didn’t! WHAT WOULD YOU DO?!”

Norah Bohan, cofounder of Depression Hurts Ireland, tweeted that companies need a strategy in place for crisis management of this kind.

FM104 confirmed after the incident that its staff would receive training for how to respond to suicidal behavior.