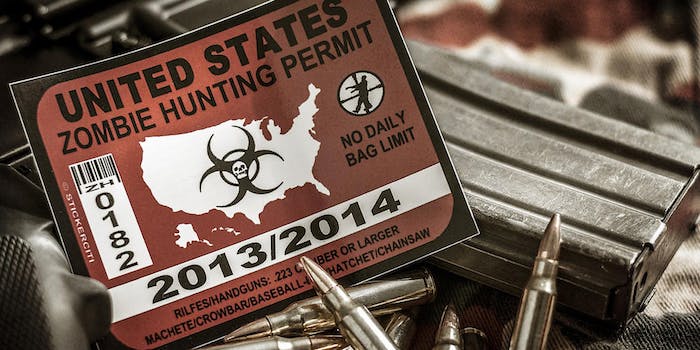 Florida is actually preparing for a zombie apocalypse

A Florida senator wants to put us one step further away from having our flesh torn by the undead.

It seems high time that the state that incited waves of zombie hysteria back in 2012 with the face-eating “Causeway Cannibal” introduced legal provisions for a zombie apocalypse. Enter Florida’s own Rick Grimes, State Senator Dwight Bullard (D.), and his latest amendment.

The amendment to Senate Bill 296 filed Tuesday afternoon reads as such:

An act relating to the zombie apocalypse; amending s.

Senate Bill 296 was originally filed by Senator Jeff Brandes (R.) last fall, with the unamended title begining “An act related to carrying a concealed weapon or firearm.” SB296 essentially provides legal impunity for individuals carrying concealed weapons during a state of emergency, allowing them to bypass all permit and licenseing procedures.

Bullard spoke to the Huffington Post about his proposed amendment:

“For me, as laughable as the amendment might seem, it’s equally laughable that people who haven’t gone through the proper training, the background check, the license to carry—we’re saying because of a hurricane or flooding or sinkhole, these individuals have gone from gun owners to concealed carry permit holders.”

Time will tell what kind of reaction Sen. Bullard’s amemndment stunt recieves, but for now, it’s the closest we’ve come to preparing ourselves against an army of the undead.