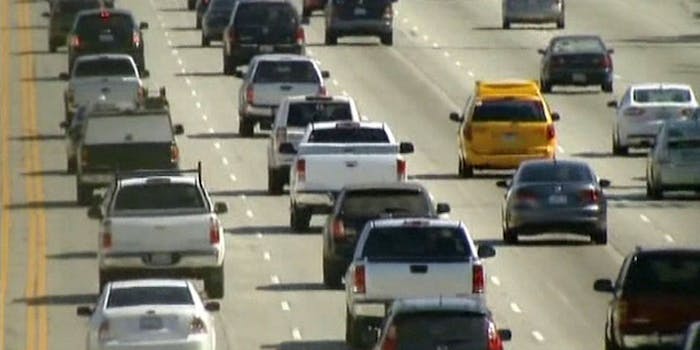 Everyone thinks their state’s drivers are the worst, but Florida’s are apparently so bad that Tampa Bay’s Fox affiliate reported the discovery of a heretofore unknown “passing lane” located on the left side of the freeway.

It was previously believed that the area was fallow land, only suitable for occupation by a bunch of stupid jamokes traveling at the legal speed limit. The revelation that the lane can be used by faster vehicles to pass slower ones could entirely change the way Floridians drive.

Citing police sources, Fox 13 Tampa Bay reported the unbelievable news that “you can get fined—even for driving the speed limit.”

Some Florida residents believe this “left passing lane” thing must be a government scam.

“State officials figured out how to abstract more money out of there citizens,” theorized one Facebook commenter.

Others aren’t sure it even exists, or complies with the laws of physics:

“It’s seems like the right lane is the passing lane whenever I’m out and about,” another commenter wrote.

“Passing lane? Passing what? Whenever I use 75 it’s a parking lot, all 3 lanes,” someone else added.

“Yea I don’t think we’re all gonna fit in one lane lol and get anywhere on time,” a third incredulous poster chimed in.

A U.S. presidential election is underway, and a man hijacked a plane in Egypt on Tuesday, but the unearthing of Florida’s mysterious “passing lane” will have further-reaching, longer-lasting effects. It should go down in history as the most important news broken in March of 2016.