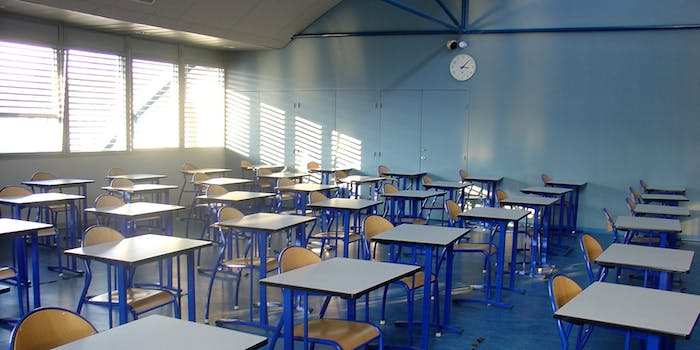 What Facebook comments reveal about the firing of a transgender teacher

Many parents are still afraid that their children will become queer if they are exposed to LGBT people too early in their development.

In a famous 1991 essay, queer scholar Eve Sedgwick wryly noted that “advice on how to help your kids turn out gay is less ubiquitous than you might think.” Sedgwick was writing in the middle of “open season” on gay and lesbian teachers, a time when parents were panicking over the possible influence that gay and lesbian authority figures would have on their children. Homophobic parents feared an army of organized queer teachers, hellbent on corrupting their beautiful babies.

While the particular panic around gay and lesbian teacher is slowly starting to fade, the panic over transgender teachers is just now reaching fever pitch. Laura Jane Klug has just become the latest in a line of transgender teachers to be pushed out of her job by concerned parents and an overzealous school board. A Catholic High School in Queens recently fired a teacher who came out as transgender. Canada isn’t immune from this rash of transphobic firings, either. The list could go on and on.

The anxiety surrounding Ms. Klug’s presence at Lumberton Intermediate School is the same as it’s ever been: the children are too young, too immature, and too impressionable to be exposed to difference. One Facebook commenter assures the trans community that “if Ms. Klug had been assigned to high school, where the students are at better ages to understand,” the parents would not have complained.

Another Facebook commenter, undoubtedly a world-renowned endocrinologist, shares a little gem in this thread:

The issue is not whether s/he should remain employed by the school district, but rather the age-appropriateness of exposure to mature subject matters that would inevitably come up in classroom setting. Pre-adolescent and early-adolescent kids are curious and almost obsessed with sex (natural hormonal rush, beyond their rational control!) and there is no way the teacher in question or the school administration would stop the children from talking about this.

Other respondents are in agreement saying that the kids are “too young,” “too curious,” and “too impressionable.” Of course, these same commenters also willfully misgender Ms. Klug and refer to her as an “it,” so I’m sure their opinions on the maturity of children are state-of-the-art.

What these commenters reveal in all of their “concern” is that childhood is the most pronounced and most contested site of heteronormative anxiety.

Many parents are still afraid that their children will become queer if they are exposed to LGBT experiences, perspectives, and people too early in their identity development, hence commenters’ suggestions that Ms. Klug would be better off teaching in a high school than in a middle school. We have to keep her away from the kids while they can still be turned. We have to protect them during that precious and vulnerable time when they are still developing their immunity to queerness!

But the suggestion that Ms. Klug move to a high school or a university is also a form of surrender to a changing world.

Thirty years ago, homophobic and transphobic parents might have been able to successfully shield their children from all mention of queerness but now the Internet spreads information about gender and sexual diversity so rapidly that there’s no way to stop kids from learning that they, too, can be gay or trans* or bi or any number of things! You can keep your children locked up in a nightmarish ice cream parlor that only serves vanilla, but once they break free they’re going to eat rocky road.

Once we accept transgender teachers in middle school, transgender kindergarten teachers will be the next target. “Can’t we just wait a little bit longer to introduce them to this?” is the constant refrain. However, in the end, it’s just a stopgap measure in a battle that they know they can’t win.

The argument that children should wait until high school to learn about queerness is also less about keeping information away from them as much as it’s about pumping a certain kind of information into them. It’s about carving out a time in which the overwhelming forces of a dominant, heteronormative culture can do their work. Because our culture believes that heterosexuality is normal, natural, and expected, we don’t see the ways in which raising children as straight is very much an active, intentional act.

On some level, homophobic and transphobic parents know that they have to try to produce cisgender, heterosexual kids. And when they can’t rest assured that their children are being raised as straight by straight people at every moment of every day, their gloves come off and teachers suffer.

Unfortunately, in order to keep their jobs and allay the fears of hot-headed parents, LGBT teachers have to do their best to fit into that bland vanilla ice cream parlor. As Ms. Klug said in her defense, “[I] would never discuss my gender identity in school.” Ms. Klug’s silence about her gender identity isn’t cowardice. It’s survival. Queer people who work with children have a choice between hiding their identities and getting fired.

I hope that someday children can be explicitly told from the beginning of their lives that they have a choice in the development of their gender and sexual identity. I dream of a day when parents welcome and encourage a diverse range of teachers because they want their children to have role models no matter who they become. But to achieve this cultural shift, heteronormative parents need to loosen their stranglehold on early childhood.

There are so many different kinds of ice cream. Let’s let our kids taste them all.

Photo via Thomas Favre-Bulle/Flickr (CC BY 2.0)