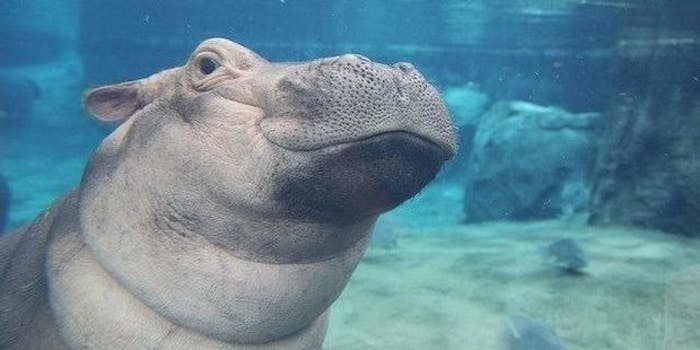 This is the love story we need and deserve.

As digital dating threatens to fully eliminate the nuances of face-to-face interactions, it can get increasingly difficult for single people (or, in this case, animals) to connect and build meaningful relationships. But that hasn’t stopped one lovestruck hippo from using the tools at his disposal to shoot his shot with another hippo who lives halfway across the country.

Two days ago, Timothy the hippo from the San Antonio Zoo made his plea on Twitter in attempt to win the affections of Fiona, the one-year-old hippo living at the Cincinnati Zoo who quickly garnered a massive online fan base for being thick, sassy, and generally adorable. Timothy admitted he’d seen Fiona online and got straight to the point: He wants to meet and become the ultimate hippo power couple.

My name is Timothy. I have seen you on the internet at the @CincinnatiZoo & you are the most beautiful hippo I have ever seen! Perhaps we can meet someday and be boyfriend and girlfriend? I am single and available. #HippoSwipeRight #TeamFiona

Twitter users quickly rallied behind Timothy, some of whom expressed disappointment that a one-ton semiaquatic mammal could express its feelings better than their own human dates. The Cincinnati Zoo responded yesterday on Fiona’s behalf, warning Timothy that dating an internet famous hippo comes with its own difficulties.

Fiona thinks you’re cute too, but it’s what’s on the inside that counts! Your DNA will decide if you’re the one for our little diva. Any potential mate would have to be ok w/ taking a back seat. Are you ok w/paparazzi? Most importantly, are you willing to relocate to Cincinnati? https://t.co/7XFCiYnyz7

Clearly, Fiona is looking for more than an attractive mate, somebody who’s willing to roll with the paparazzi and accommodate her busy press schedule. Seeing as the Cincinnati Zoo has 211,000 followers compared to the San Antonio Zoo’s 7,000, it makes sense that Fiona would want to screen her potential mates carefully to make sure they’re not in this just to boost their own clout.

Hopefully, Fiona and Timothy can enjoy a romantic weekend together soon. Even hippos deserve their shot at love — and the internet deserves another wholesome power couple to ship.