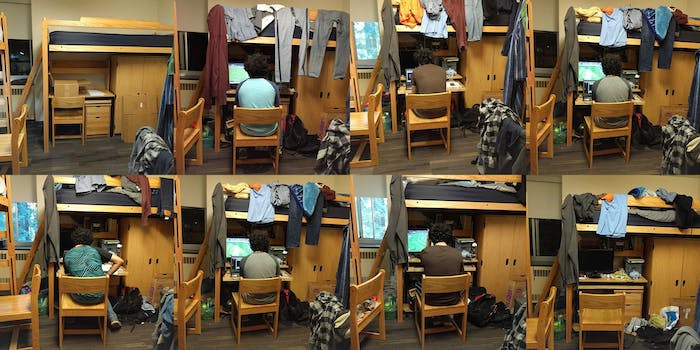 An anonymous college student lucked into the chillest roommate situation ever—and had the foresight to turn it into an Instagram account.

With @fifaroommate, the freshman immortalized his roommate’s decision to waste his life playing FIFA soccer on the PS4 in a series of daily photos. He started in March and wrapped up when Fifa Man moved out in June.

It’s truly a fascinating document on the beginnings of college bro life, a quiet observation of Homo freshmanicus in his natural environment. FIFA Man faithfully plays the game every day, or about three or four times as often as he changes his shirt. His dirty laundry accumulates atop his bunk bed, framing the back of his head as he stares at the screen. He does not seem to have cut his hair during the semester.

He did, however, wash himself. Careful observers will note that the shower caddy under his desk occasionally changes position.

Near the end of the series, the FIFA chair is empty for four photos in a row, the first time we’ve seen FIFA Man away from the game. “Final is coming,” FIFA Man’s roommate explained. For a brief time, virtual soccer must take a backseat to studying.

The only way this could be better is as a time-lapse, showing the laundry piling up in various configurations, the hoodies moving from bed to chair, towels appearing and disappearing.

Dude set out to make fun of his roommate, and he succeeded, but his project turned out to be much more fascinating than that.

Sadly, the two will not be rooming together again in the fall.