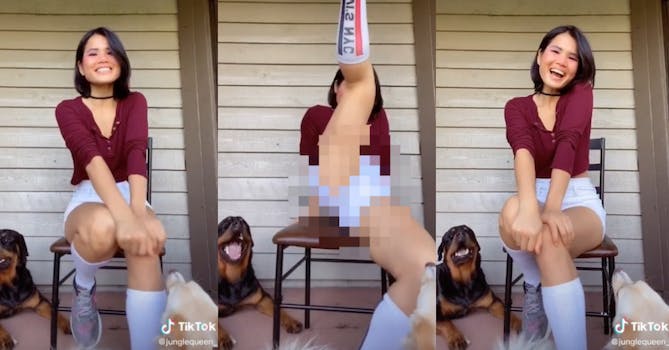 Men are confused by this cute girl farting on TikTok

Even the dog looks confused!

We’ve all heard of the children’s book, Everybody Poops, correct? The “part biology textbook, part sociological treatise,” according to the Amazon description, educates on how “creatures throughout the animal world—including humans—deal with the products of digestion.” So by those same mechanics, it also stands to reason that everybody also farts from time to time. Yet, for some reason, men are completely perplexed by a farting girl on TikTok.

The TikTok user in question, @junglequeen_, or, Nana May, seems to specialize in a niche of sexy gross-out videos—oftentimes, alongside her pet rottweiler. The video which has gotten her all the attention features Nana May sitting on a chair while wearing booty shorts and smiling impishly, before lifting her leg high in the air, farting, and then innocently asking: “Hi, how are you guys?”

Since being uploaded on Nov. 9, the video has been viewed nearly three million times, which should come as little surprise. Between the cute farting girl, crude humor, and dog’s likewise perplexed reaction—it honestly had all of the ingredients for a viral TikTok.

It has also spawned a whole subset of reaction videos from men, primarily (although also a few women), who expressed their disgust at the sheer audacity of a woman farting on camera.

Of course, there are men who are thirsty enough to overlook a farting girl on TikTok, if she’s pretty enough, anyway. Uh, hooray for progress??

Hey, it takes all kinds, are we right? But for everyone else, if you can’t take a farting girl, get off of the internet.