First there were glitterbombs to send to your enemies. Then came the bag of dicks to mail to the haters. Now you can gift all the assholes in your life a good ol’ fart in a jar.

‘Send a Jart’ is a stinky service that’ll send anyone a sealed flatulence in a jar—along with a nice little note—for the meager price of $10. Choose your stench: 8hr Trucker Fart, Hungover Frat Boy, or Competitive Eater—all the pungent scents from your worst olfactory nightmares. 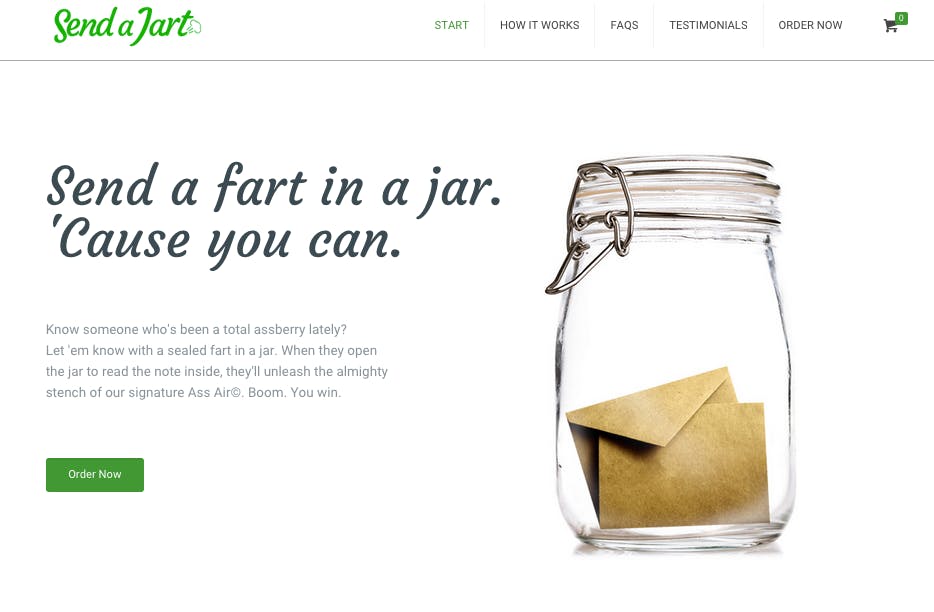 Just imagine the recipient’s face once they open the jar and gag on the aroma of waking up on Sunday morning after hooking up with a frat boy. Let’s hope there’s at least an insurance policy if the present ends up causing some nasty pink eye.

The site offers some stellar testimonials, if you’re wary of such businesses. Here’s one from Jennifer S.:

“A few months ago, I put my lunch in the fridge at work. It had my name on it in big bold letters. I caught someone eating it and asked them if their name was “Jennifer.” Turns out it was. Two can play that game, girl. I sent her a Jart a week later. She won the battle, but I won the war.”

We are truly blessed to live in a time where we can ship off some poopy breeze to people we just don’t like—or even our besties, just to give them a little trollish love.

And hey, if you end up opening a jart, let it air out and you can use the mason jar as a nice little vase or drink glass.