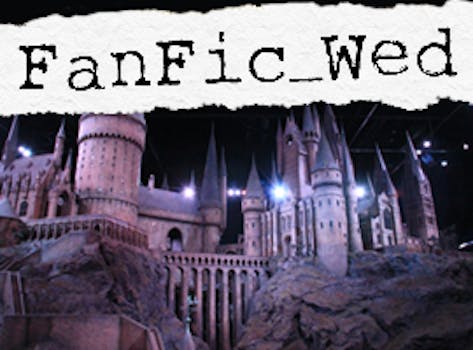 There will be names for you in the history books and they will be wrong. Because no matter who is left standing, no matter who reaches into the past and colours it black and white and bloody with the power of their words, they will not know what manner of person you are; how can they, when you do not know yourself?

—Fahye, “The Game of Kings”

One of the things I believe is that good fanfic can not only subvert a narrative, but strengthen it. Last week on Fic Rec Wednesday, we took you into the mind of Inception’s femme fatale, Mal, to show you how different the story could have been from her point of view, if she’d been allowed to be a fully dimensional character instead of her husband’s shade.

This week, we take a look at another character whose main role in the original is to shadow the hero: Draco Malfoy, the inept archrival to JK Rowling’s beloved hero, Harry Potter. In Fahye’s 2009 fic, “The Game of Kings,” we see into the dark side of Harry Potter, and the ways in which he and Malfoy mirror each other.

Members of the Harry Potter fandom have spent over a decade critiquing, rewriting, and revising the narrative of the seven novels (and three companion books) in the Harry Potter series. The series emphasizes tolerance, peace, uniting to fight a common enemy, and the importance of family and love between friends—all great themes for readers at any age. But these themes often get subverted in the novels themselves, because while the books tell us one thing, they just as often do something very different. 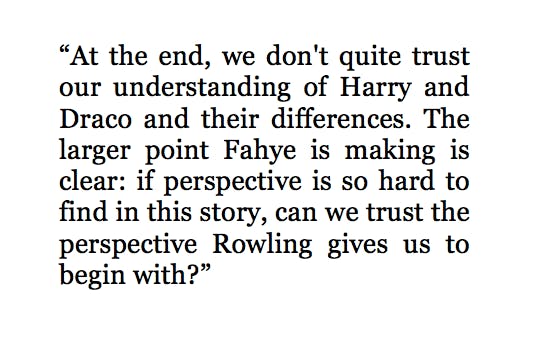 Again and again throughout the books, Rowling complicates her moral paradigms only to shy away from really exploring them and end up at a “because I say so” approach to good and evil. Because Harry is the “good” character and Draco is the “bad” character, Draco’s actions nearly always place him on the losing side. But they are in actuality alike in many ways—Harry wants a real family, and a life surrounded by the love he was deprived of as a child; Draco wants the approval of his father, an unquestionably evil man who nonetheless seems to love his son. Harry and Draco both use lies and cunning to achieve what they want, but Harry’s lies and cunning get coded as resourcefulness; for Draco, they’re coded as sniveling ambition and often as cowardice. Both boys come from famous, well-off families, both play the same position on their Quidditch team, both are looked to as leaders of their respective houses; but Harry almost always gets the best of Draco in every interaction, whether it’s beating him in a practice duel in year two, or seriously wounding him in an actual duel in year six.

Fahye’s fic, “The Game of Kings,” is a beautifully written character study of Harry and Draco which achieves a deep level of introspection for Draco, giving us a second person narrative that skillfully interweaves both Harry and Draco’s point of view. She explores how similar and yet how different their paths are, what dark choices they are both pressured into making.

This fanfic follows Harry and Draco through their sixth year, working through most of the major plot points of the sixth book, which largely deals with Draco’s repeated attempts to kill Dumbledore in order to save his own family. In the original work, Draco is struggling to complete his task while Harry is struggling with his own (to learn more about the killer of his parents and how to defeat him). Harry and Dumbledore pay a visit to another character, so that Harry can subtly convince them to come to Hogwarts.

In Fayre’s retelling of the scene, we see Harry looking at a shelf full of photographs, watching the faces of his mother and other people who are no longer in his life:

Dumbledore knows what he’s doing. Even when he leaves you in the room with Slughorn’s worried expression and the rubble of a Muggle household, you can feel his hand, steering you onto an invisible path, one step at a time. You still don’t like the idea of being a pawn but if there’s anyone you’ll bend your pride for, it’s Albus Dumbledore.

Fahye subtly presents Harry as someone who knows he’s being used but who is perfectly willing to be used for a cause.

By contrast, Draco really has no idea what he’s in for, and as the story switches to his point of view, we see his thoughts circling in on themselves, as chaotic and troubled as Harry’s are calm and steady:

At dinner you stir your stew and mashed potatoes into an unrecognisable mess and make the effort to laugh at Pansy’s jokes, to watch Blaise illustrating strategy with a pepper shaker for a Chaser and three carrot sticks for goal rings. Your head hurts from reading and your throat is raw from casting spell after spell on the Cabinet, and all you can see when you glance across the room is Potter lapping up the adoration of Weasleys. Stupid bloody Potter winning at Quidditch winning at Potions winning at romance winning winning all the time, as though he hasn’t a care in the world, as though the end isn’t pressing iron heavy and diamond hard on both of your shoulders.

The second person narrative isn’t a typical one for fanfiction; in fact second person is often considered awkward and overdone. Fahye uses this narrative wisely: the reader immediately identifies with both speakers and also feels a sense of discordance when it shifts between the two boys. Ultimately, this is Fahye’s greatest structural talent in this fic—the blurring of the voices of two characters who are portrayed as diametrically opposed. It’s similar to the card trick that Draco refers to throughout the story:

It’s like that Muggle game Blaise taught you all in second year because it was Slytherin enough for you to overlook both its origins and the strange playing cards, with their immobile numbers and their frozen kings and queens and their symbols like drops of blood. The point of the game is to deceive, to pretend that you’re putting down the right cards even when you’ve got nothing at all. And if you’re good enough at bluffing than you can claim the same thing round after round after round, three eights or two kings or whatever you please, and nobody will know if you put them down the first time or if they’re still in your hand or if they’ll lose everything when they dare to call you out. Just pretend. Just pretend and you can win.

That’s what this is.

Fahye’s fic may be inaccessible to people who aren’t familiar with the series or who haven’t read book 6 or watched the film in a while; but even if you’re a casual Harry Potter reader, it’s easy to see the larger point she’s making about the damaged politics of the wizarding world. As Harry uses darker and darker methods to manipulate the truth out of the people around him, under the excuse that it’s what Dumbledore wants him to do, Draco becomes more and more aware that he’s trapped. By the time we’ve reached the line, “It’s this or it’s failure. You have no choice,” the shifting points of view have begun to blur and merge.

At the end, we don’t quite trust our understanding of Harry and Draco and their differences. The larger point Fahye is making is clear: if perspective is so hard to find in this story, can we trust the perspective Rowling gives us to begin with?

This questioning of moral purpose, authority, and connection between two boys who seem so diametrically opposed are all values already present in the novels Rowling wrote. It doesn’t matter whether the author intended so many of her fans to read so much ambiguity into her text; the fact that it’s exactly what so many fans have done gives her work, and theirs, that much more power.

And conversely, the fact that a fanfic like Fahye’s can play so deftly with points of view, character development, and narrative and yet never once deviate from the plot of the sixth book tells us all we need to know about how complex and immersive the surprisingly dark world of Harry Potter really is.