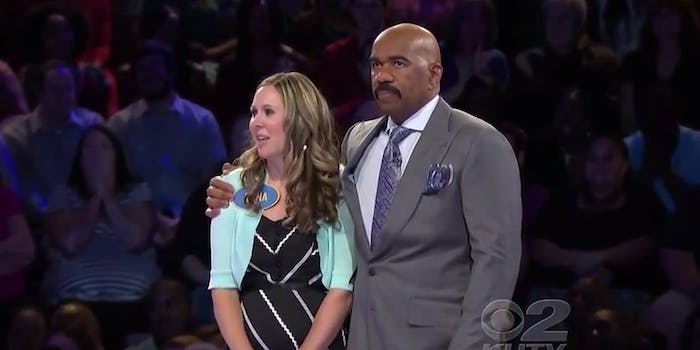 This ‘Family Feud’ fail is going to ruin Christmas

It might be the worst game show performance we've seen yet.

We’ve seen enough impossible game show victories and terrible defeats to know that the result of this one is just downright cruel.

When it comes to Family Feud, the show is full of questionable answers from the survey takers and the contestants themselves. More often than not, it’ll get a rise out of the audience and host Steve Harvey, such as naming “orange” for a yellow fruit, even if it doesn’t bring in any points.

In the case of Anna Sass, she only needed to score 18 points to win $20,000 for her family, a rare enough feat in itself. With just one slightly popular answer, maybe two, she could win.

It’s clearly not her lucky day.

Harvey’s already expressive face says it all, but at least the family knows who not to send up next time.