Some weirdo created a fake OkCupid profile with my photos

When you're a woman online, you can't even control how other people will use your photographs.

I’ve heard countless horror stories about OKCupid and Tinder from friends, Tumblr accounts, and funny listicles. There is apparently no depth to the amount of awkwardness and weirdness that exists on dating sites, which makes me immeasurably glad that I have absolutely no use for them.

Still, though, I have been unable to completely avoid having an OKCupid presence, because some random weirdo on the Internet created a profile with my photos.

A few weeks ago, I was working late at night when I got an email with the subject line “Is someone using your pic?” I figured it was a spam email, but I accidentally opened it when trying to move it into the spam folder. In the message, there was a link to an OKCupid profile for a user named “prettypretty111” that was using two of my photos. I was (understandably, right?) freaked out, so I emailed the tipster back, and asked who the hell they were.

According to the response I received, the email came from an alleged digital do-gooder who had seen the profile while he was browsing for matches, and assumed that it was fake. He (or she?) explained that they used Google’s reverse-image search to find my photo, which was attached to an article I had written. The article had my Twitter handle, which somehow led to my email address.

It’s pretty clear that the person who told me about prettypretty111’s profile has no clue who I am, but they explained that they had a stalker once, and advised that I should do random Google searches with my photos to make sure that no one was trying to pass themselves off as me.

At this point, I was sufficiently freaked out, and scoured the Internet for hours to make sure that there weren’t any other photos being used without my permission.

The profile is obviously someone who is trying to be an asshole, because no one would describe themselves as a single ex-hairstylist who lives in their elderly mother’s basement because they got fired from their job and dumped by their boyfriend for their video game addiction and adopting nine cats. There is, of course, the obligatory fat-shaming, but I’m mostly offended that they said that I believed in creationism in the OKCupid questionnaire. 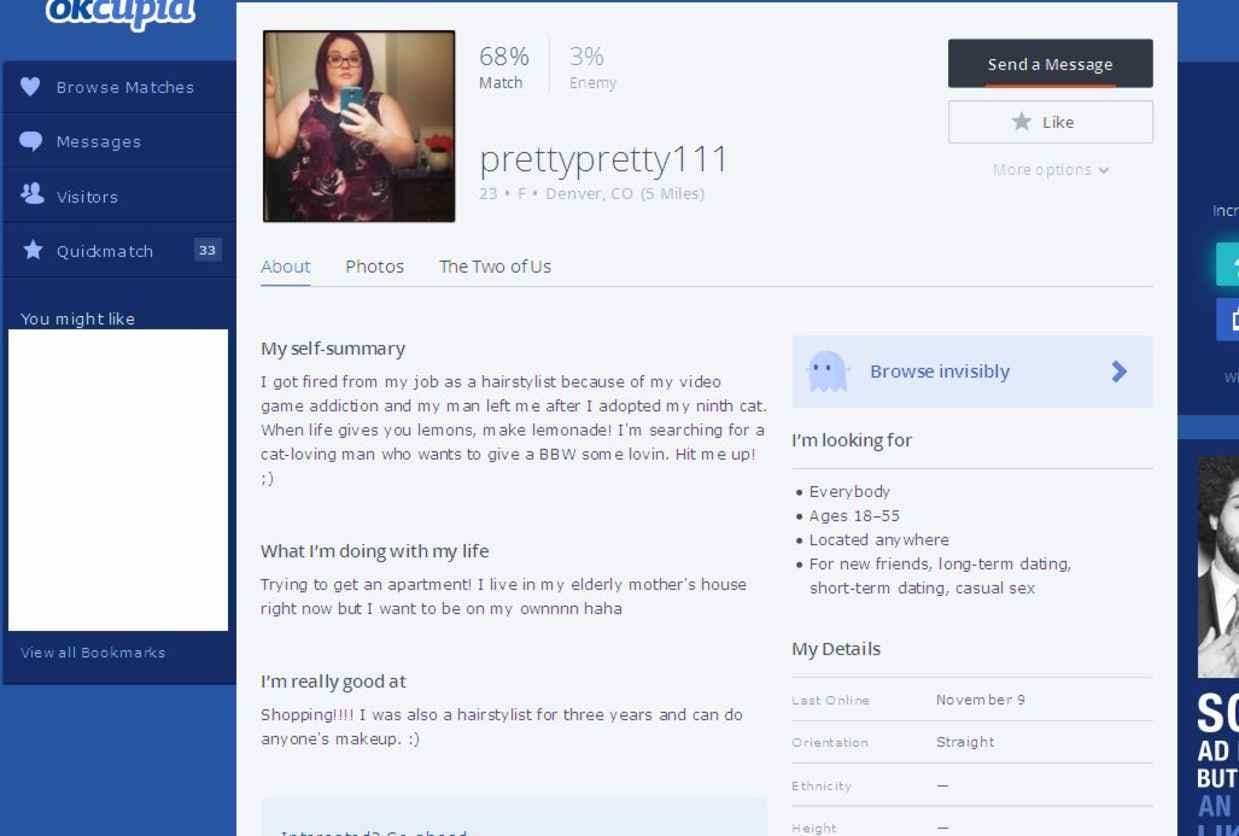 It’s easy to think that this is something that you’d see on an episode of MTV’s Catfish, but this just doesn’t seem like the kind of thing that a lonely and sad person who isn’t confident in the way they look would do. Fake profiles are abundant on dating sites, to the point where you can find countless guides online that provide tips to help you avoid being scammed.

This much more resembles the kind of online trolling that is intended to scare women and make them feel unsafe. Frankly, I would have been less freaked out if the person legitimately was just trying to “catfish” someone. There are thousands, maybe millions, of these faceless Internet trolls who use whatever tools they have at their disposal to make your life a living hell. Just look at GamerGate for a recent example.

I’m used to this kind of trolling. Any time a woman writes about gender-specific issues on the Internet, there are inevitably men who get really, really angry about it, and decide to let her know in pretty despicable ways. I held an informal online poll with some friends, and at least three said they’d experienced trolls setting up Facebook profiles, dating site accounts, or other online outposts using their photos and information.

Fortunately, my situation resolved pretty quickly. OKCupid does a pretty good job of responding to these types of complaints. I sent an email to their online support team, and they had deleted the profile within 24 hours.

I will probably never know who set up that fake OKCupid profile, and they probably don’t even know me. But I am not the only one that something like this has happened to, and that’s the problem.

Just about every woman who exists online experiences some kind of harassment or intimidation from men, no matter what they’re talking about. The Internet isn’t a safe place for women, and that’s an issue that is much bigger than some individual asshole creating an OKCupid profile to say mean things about me.

This post originally appeared on xoJane and has been reprinted with permission.