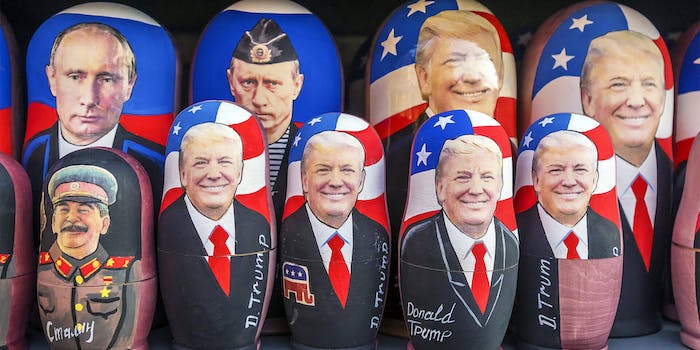 It's a bottomless pit of weird memes and head-turning fandom for America.

Yesterday, Popular Info broke the news of a network of Ukrainian-run Facebook pages that are heavily patriotic, pro-Trump, and purport to be American.

But Ukrainians aren’t the only ones getting in on the fake American Facebook page game.

The Daily Dot found dozens of seemingly American pages that are managed by people in Greece, Pakistan, Cambodia, the United Kingdom, Chile, and more. An unknowable number of people in foreign countries run pages that are hyper-patriotic or pro-Trump or express enthusiasm for classic movies and landscape photos. Nearly all were created since Trump was elected. Their follower counts swing from a few hundred to more than a million.

Facebook told Popular Info that the pages did not violate its terms of service, but subsequently, at least six of the pages run by people in Ukraine disappeared from the site.

Ukrainian-run pages appear to have been the largest pro-Trump foreign-run pages until Facebook began disappearing them from its site after the story broke. These pages led to others like them created by people from all around the world. Facebook’s related page feature essentially functions as a trail of breadcrumbs leading from one page to another and another in this vast network.

American Lovers posts pro-Trump, anti-Democrat, anti-immigrant, patriotic, and offensive content that appeals to the far-right. A post last week suggested that burqas should be outlawed, prompting comments like, “Yes, I want to see the face of the Terrorist.”

According to the transparency feature added after the 2016 elections, American Lovers is run by two people in Pakistan and one in the United States.

They’ve found an eager audience on Facebook. Since being created in May, the page has attracted 6,000 followers with anti-immigrant memes.

Related pages lead from American Lovers to Trump News 4 U, where posts critical of Barack Obama and Hillary Clinton share space with those lauding Trump.

Trump News 4 U is managed by someone in Cambodia but claims to be located in Florida and to have an Alabama phone number. Like many of its ilk, it does a good job emulating Americans with some notable exceptions.

Related pages also take people from American Lovers to Bucephalus News, a page created the day after the November 2016 election. It was briefly known as Trump Trump Trump.

Reelect Trump 2020 Support Group, which is managed by one person in Chile, has a singular mission.

Even seemingly random pages, such as the Press Like if you’re a fan of classic Movies page that five people in Ukraine and one in Russia managed, can lead to foreign-run, pro-Trump, and patriotic pages.

The related pages that Press Like linked to were God bless Donald Trump and God bless America, American Lovers, and Love Jesus? Join Our Free Bible Club-Click Like. (On Monday, while the Daily Dot was researching this story, all four of the pages were taken down; it’s not clear why.)

The only thing Press Like had in common with any of these pages other than a hyper-patriotic profile picture is that all were run by people in countries other than the United States, and led to other pages also run by foreigners. 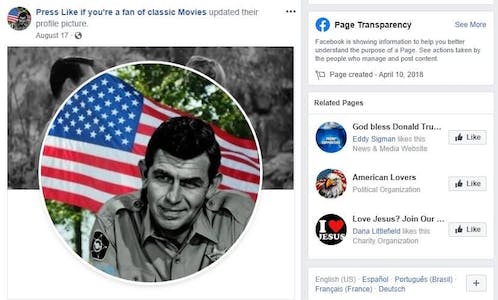 In addition to pro-Trump pages, people in foreign countries run pages that seem to function to drive web traffic, circulate images and memes from content mills, or for other non-political purposes.

I Love USA, a page run by 10 people in Greece that has more than 500,000 followers, posts pictures of American scenery interspersed with links to travel stories. On New York, USA, four people from Bulgaria treat their 13,000 followers to stock images of the city; The American Dream is run by two people in Italy who post scenic photos of various American locales.

Love USA & New york [sic] is run by two people in Pakistan. Created in 2015, its 55,000 followers tune in for content comprising a bizarre mix of links and memes. Some posts read as if they were translated to English with a web app. 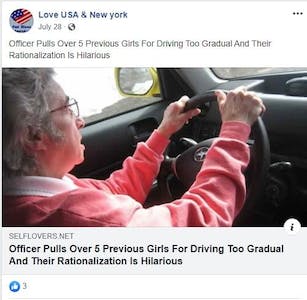 Many of the stories Love USA & New york posts are from SelfLovers.net, which appears to be a content mill. The SelfLovers.net’s Facebook page has 1.2 million followers and is run by four people in Pakistan and one in Bangladesh. Judging by the posts, it’s clearly designed to appear American in origin.

Russia using Facebook to influence the 2016 election caused a global scandal as it undermined faith in both the election system and social media. Clearly efforts are currently underway to influence the 2020 elections, though it is unknown precisely by whom, and whether they are affiliated with foreign powers.

By deleting the Ukrainian-run pages within hours of their foreign connection being made public, Facebook is perhaps signaling that it takes the matter very seriously.

Although it doesn’t appear to be that much harder.