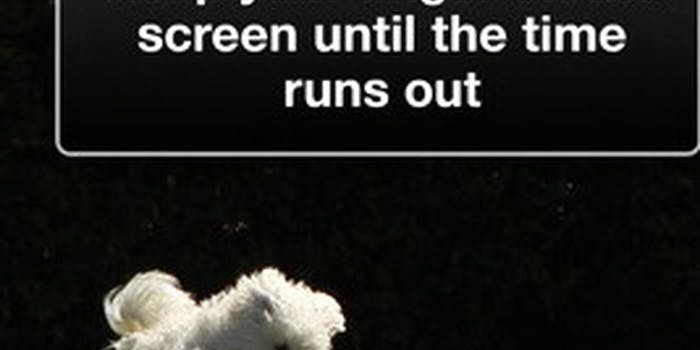 Like the hugely popular Snapchat app, Facebook's Poke sends messages that disappear seconds after they're seen. Unlike Snapchat, Poke starts with an audience of hundreds of millions.

Facebook is trying to kill off the rise of private messaging app Snapchat with its own version.

The world’s biggest social network is releasing an app called Poke, which lets you send a poke (one of the oldest Facebook features), text, photo or video message to an individual or a group of people using your smartphone. The trick here is that the message will disappear a few seconds after the recipient sees it.

Just like Snapchat, you’ll need to hold your finger on the screen to see whatever it is they’ve sent you. The messages can be set to expire after one, three, five or 10 seconds.

Poke is a clear move to snuff out the rise of Snapchat, which has skyrocketed in popularity over the last few months. Obviously, Facebook has a large number of users it can push this app to (more than 600 million people use Facebook from their phones, though not all will be able to run the Poke app), so if it takes off, there’s no telling what it’ll mean for Snapchat.

There’s one thing that you’ll need to consider before moving your disappearing messages over to Facebook’s empire: Do you really want Mark Zuckerberg to see your sexts?

Snapchat’s rise was driven by the promise of messages which you could send that’d disappear quickly, and it would alert you if anyone took a screenshot of your photo. That led to Snapchat apparently becoming a popular way for people to send nude photos of themselves and explicit messages—even though there’s nothing stopping a recipient from taking a screenshot of your photos.

It would seem Poke’s raison d’être, as with pretty much everything else on Facebook, is to learn more about you so it can figure out how to show you better ads. It’s up to you if you want Facebook peeking in on your intimate messages even more than it already does.