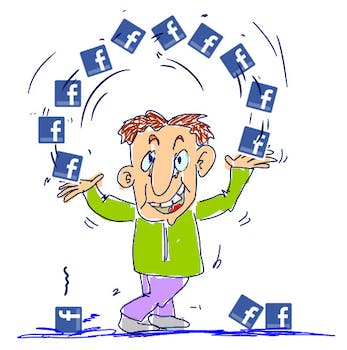 How Facebook decides if you’re an active community member

Even if you don't visit Facebook, you may still be considered an active user if you're passively sharing on the site.

Last week, Facebook filed the required S-1 paperwork it needs in order to hold its initial public offering (IPO). Since then, the documentation has been picked apart to reveal some juicy details.

One interesting tidbit is how the company defines its active community members. In addition to those who visit the Facebook website, mobile site, and mobile app, community members are considered active if they, in some way, shared content or their online activity through a third-party provider.

This means that if you hit the “like” button on another website, passively share what you’re listening to on Rdio or Spotify, or automatically share your tweets on Facebook, then you’re considered one of Facebook’s active community members—even if you never actually visited facebook.com in a given month.

Facebook revealed in its S-1 form that it has 845 million monthly active users, or community members, and 483 million daily active users.

The company isn’t being disingenuous about how many active community members it has. In fact, it’s actually being fairly transparent about its numbers and exactly how it defines its usership.

Google, on the other hand, is much more vague when it comes to defining Google+ engagement  and the number of people who regularly participate in that community.

The only thing Facebook can be accused of here is not being clear about how many community members actually visit the site.

This is relatively important for investors as Facebook only places ads in front of viewers—and only generates revenue from them—when community members visit its website. It doesn’t yet display ads on its mobile offerings, though it appears mobile ads are on the way.

Internet usage analyst Nielsen Company reported that 153 million unique users visited Facebook’s website in the U.S. in December. However, Facebook says in its S-1 form that it had 161 million US active community members over that month.

Meanwhile, Facebook noted that there are some mobile apps that automatically connect with its servers to receive updates without any direct interaction on the part of a community member. It explains that this may affect the number of active users, though it estimates that this affects less than five percent of its daily active user numbers.

If you don’t happen to visit Facebook’s website often, but still share content and your online activity with the community, you’re still helping Facebook to build up a clearer picture of your interests. This helps the company to serve up more targeted advertising and boost its revenue when you do eventually visit the site.

Just don’t expect to receive a cut of the spoils when Facebook finally hits the stock market.