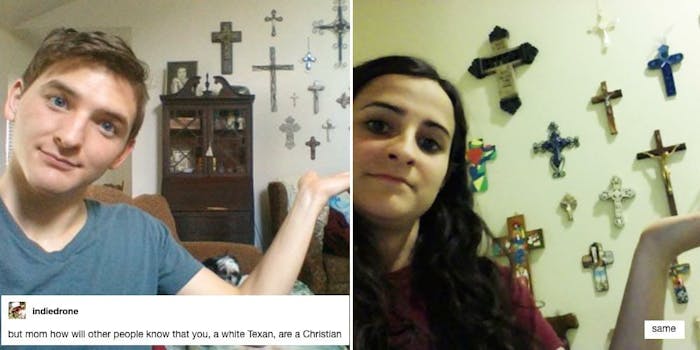 An even greater crossover than 'Avengers: Infinity War'?

Texas may very well be on its way to becoming a blue state—if Ted Cruz’s very narrow margin over Democratic Senate challenger Beto O-Rourke in 2018 was any indication. But even as the state’s urban metropolises begin to attract younger, diverse, and more liberal crowds, well … the rest of Texas is still gonna be Texas.

To that effect, a self-proclaimed vegan Houston resident named Nicholas, who goes by the username “Indie Drone” on Tumblr, recently posted a selfie displaying his mother’s quite ample collection of crucifixes found on at least one wall of the family home.

“But mom how will other people know that you, a white Texan, are a Christian,” he joked.

As his post went viral, it wasn’t long before another female user who went by “fullblownpanic” added a snap of her own, showcasing her mother’s crucifix collection. (She has since deactivated her Tumblr account.) “Same,” she bluntly added.

Another user jumped into the fray to suggest that the pair were clearly soulmates, surely on their way to becoming a couple. But fullblownpanic shut down that notion by replying, “I’m gay.”

Yet in another twist of fate, Indie Drone added, “me too.”

And that would certainly be a cute enough ending to a quirky viral story, except that in a delightfully charming epilogue, the two ended up finding and befriending one another at Houston’s 2019 Festival & Parade over the weekend.

You can see the whole thing unfold in the below Tumblr post. “This is such a great story,” user kateordie commented.

“Some fool: Avengers: Infinity War was the most ambitious crossover event in history!” commented yet another user, referring to the great Avengers crossover meme of 2018. “Tumblr users indiedrone and fullblownpanic: oh really? Watch this…”

In this current timeline, it’s always nice to see a life-affirming, wholesome story about young people mocking their parents, uh, evident religious zealotry? Oh heck, we’ll take what we can get.