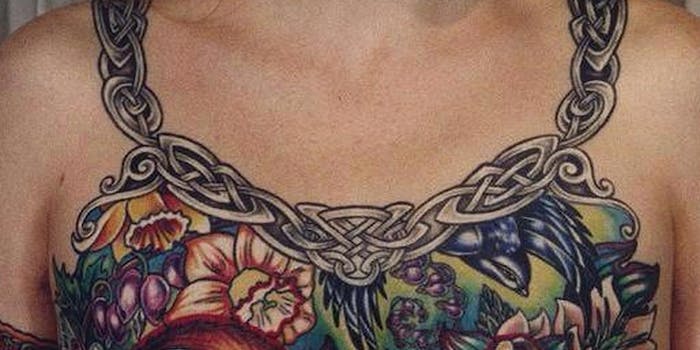 There doesn't seem to be anything indecent about a picture showing a breast cancer survivor's tattoo covering her bare chest. But Facebook keeps pulling it.

There doesn’t seem to be anything indecent about a picture showing a breast cancer survivor’s tattoo covering her bare chest. But Facebook keeps pulling it, and users are complaining. The image, which has garnered 110,000 shares since Feb. 13, shows the clothes-free torso of a woman who has recovered from a double mastectomy. An elaborate tattoo of a woodland scene is draped across her.

It appears on the Custom Tattoo Design page and reads, “Facebook keeps removing the post in 24hour as an offensive photo do [sic] to nudity.”

“However we feel this woman is both brave and strong so we’re going to post it anyways and ask for your awareness and support,” the comment continues.

Facebook’s alleged deletion of the picture has garnered more than 16,000 angry comments. Numerous users call the picture “beautiful,” are calling the women “courageous,” and are sharing their personal tales of how breast cancer affected them.

“I think it’s beautiful and if Facebook thinks this is offensive then they should look at some of the other sites on Facebook there is no nudity here unlike other pages,” wrote Roxanne Firman.

The Daily Dot has reached out to Facebook to confirm if the picture was pulled in the past, and if so, for what reason. We have not yet heard back.

The site’s Terms of Services read that nudity is not allowed on Facebook, like the group claims, but what defines nudity isn’t defined. (However, since the image is taken from a book about women and tattoos, perhaps Facebook is taking it down due to copyright infringement.)

Facebook has riled up its users in the past for inexplicably censoring a not-so-nude picture. In November, the site censored a woman’s elbows. (In all fairness, they look like nipples in the thumbnail.)