Why it matters if Facebook is rejecting advertisements critical of it

Last week, I encountered something I had never experienced before when purchasing a Facebook promoted post (a form of advertising that places your content right in people’s newsfeeds). I had written an essay about whether Facebook can get us to care about serious news, and if squinted at the right way it could be construed as vaguely critical of Facebook for the media consumption habits it’s enabled. As I often do after writing a new piece, I posted it to my Facebook page and put a little money behind targeting the post toward those who work in the media industry.

Typically, there’s a short waiting period while Facebook’s algorithms scan your ad and determine whether it’s approved or rejected. If it gets rejected, it’s usually because it violated one of Facebook’s ad guidelines, like the one limiting the amount of text that can be shown in the accompanying image. Usually the wait for approval takes less than 15 minutes.

Not this time though. I can’t remember exactly how much time went by, but it was at least two hours before I received any indication of what happened to my ad. At first, it was just a small bit of text in the ad dashboard telling me the ad was “not running” without saying why. Finally, I received an email from the “Facebook Ads Team” explaining why it was rejected:

The second was the nature in which my ad was rejected. Based on prior experience, Facebook should have been able to quickly scan the ad and reject it within a few minutes. The fact that it took a few hours made me suspicious that it had been somehow flagged by the system and then reviewed by a human—someone who could judge it not just based on whether it misused Facebook’s branding but also on whether it said something that Facebook didn’t like.

If this was true, then it would be both noteworthy and alarming, and I briefly pondered writing an article about my experience. But I decided to give Facebook the benefit of the doubt. After all, when I swapped out my image for a generic photo of Mark Zuckerberg and resubmitted, my ad got approved. Also, my story would be very anecdotal.

But this week my experience became slightly less anecdotal. The International Business Times published a piece highlighting several instances where Facebook rejected unflattering promoted posts. It first noticed the policy when IBT tried to promote one of its own articles that was critical of Facebook.

You may be reading this and thinking: “So what if Facebook rejects ads critical of it? It’s not a news organization and has the right to protect its brand.”

The reason this is worrisome is that thousands of news organizations are increasingly investing both time and resources in growing their Facebook presence, and Facebook has been actively lobbying them to invest in it even more.

In late 2013, a report from Shareaholic found that 17 percent of referral traffic to publishers came from Facebook. By mid-2014 that number was up to 23 percent.  There are many news sites out there that derive the majority of their traffic from Facebook (even as others attempt todiversify their traffic sources). A few years ago Facebook tweaked its algorithm to produce a traffic hose of visits to news sites, and those sites, wanting to capitalize on that traffic, assigned full-time staffers to optimize both their pages and content for Facebook.

Recently, as David Carr reported in the New York Times, Facebook representatives have been going on a “listening tour” to several news publishers in an attempt to get them to host their mobile content within Facebook’s ecosystem, all under the guise of improving the user experience. “That way, they would load quickly with ads that Facebook sells,” Carr wrote. “The revenue would be shared.”

Some have worried that entering this kind of partnership would give Facebook too much leverage over the news media, eventually weakening the media’s ability to make money while strengthening Facebook’s grip on the internet. This news that Facebook might be censoring ads should give these news companies further pause. Do you really want to relinquish your content to a company that might actively suppress news that’s critical of it? Will you be sacrificing your right to report on the most-visited platform on the Internet?

To be clear, the evidence is still very much anecdotal, and Facebook is denying that any form of censorship is occurring. Still, if I were an audience development director working at a news organization that’s currently contemplating a content partnership with Facebook, then I might want concrete and specific assurances, in writing, from whomever at Facebook I’m negotiating with. Otherwise, you’ll be signing away a lot more than your content with your partnership deal. You may be signing away your very editorial independence.

So I decided to run this article as a promoted post on Facebook, and as you’ll see in the screengrab below, my post was “not approved.” Now, unlike my last experience with a rejected ad, this time I made sure to use no official Facebook logos or branding with my thumbnail image. Instead I simply used a photo of Mark Zuckerberg. Again, like last time, I didn’t receive an immediate reason for why my ad was rejected. Given the lack of Facebook branding in my post, it’s hard for me not to conclude that it’s because I was critical of Facebook. Here’s the screengrab: 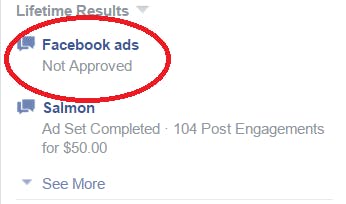 Having my ad rejected made me naturally curious if Facebook was applying these standards equally whether the content was positive or critical of the company. So I created a dummy WordPress account and wrote a short blog post titled “Why Facebook is awesome.” I then posted it to my Facebook page and ordered $10 worth of advertising. A few minutes later I received noticed that the ad was “not approved.”

This is at least anecdotal evidence that Facebook is rejecting ads even if they’re positive. I still find it worrying, however, because it still means it’s suppressing any ads that mention Facebook or include photos of its logo or CEO. Considering it’s the most widely used Internet platform in the world, this has profound implications for those journalists and media companies who want to cover it.