That's one way to get back at him.

One dude is facing pop culture hell thanks to the wrath of his scorned ex-girlfriend, who has turned out to be as savage as Daenerys Targaryen.

According to the guy’s post on r/relationships, he and his ex had been together for almost a year when they broke up. And while they were dating, his partner showed him the magic of Game of Thrones. Like most, he became addicted.

After the split, his ex-girlfriend found out he had repeatedly cheated on her, and they had a nasty argument. She’d blocked him on every form of communication, but on the Monday after season six of the hit show premiered, she unblocked him and had sent him a couple of messages, all of which were spoilers for the episode.

This wasn’t a one-time thing, either. She has continued to haunt him with intel on the show, ensuring that he’ll never get to be astounded or surprised by what goes down on GoT. And since he has to wait for his current bae to get home before watching the show, he has little hope of beating his ex to the punch. He explains her devious tricks in the post:

Since then she spoils the show for me every week. I tried to ask her to stop but she blocks me immediately after she sends the message. I blocked her on whatsapp, but she did it via Facebook. Then the next week it was text. She even borrowed one of our mutual friends phones to do it, and I fell for that. (Our mutual friends are all closer to her and apparently hate me now because of what she’s told them about me).

The Reddit thread has since been deleted, but we grabbed a screenshot for your cackling pleasure. 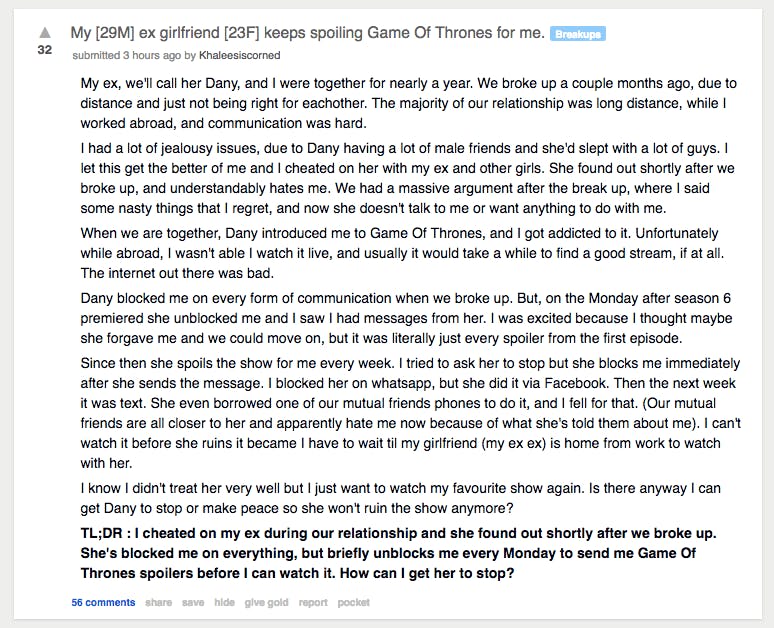 What’s scarier, having dragons come after you or getting spoilers every Monday?